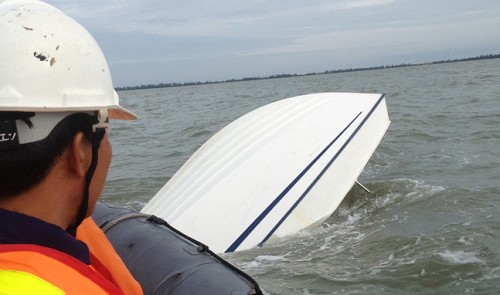 Police in Ho Chi Minh City reported that they have arrested two directors of two different companies for wrongdoings that contributed to the death of nine people in an overloaded motorboat that sank off the city’s Can Gio District in August.

The two have been charged with “putting into operation unsafe waterway means of transport” in pursuant to Article 214 of the Penal Code.

Before their arrest, a high-ranking official of the Vietnam Maritime Administration said that the the investigation by a special team of the Transport Ministry showed that the two men must be held responsible for allowing the H29 speedboat to carry passengers from Tien Giang to Vung Tau by sea, while the vessel is designed only to operate on rivers and bays.

The vessel had a capacity of 12 persons but as many as 30 people were loaded onto it. As a result, it sank after encountering strong waves off Can Gio on August 2.

The investigation team also revealed that some individuals had concealed information related to the accident after it occurred. They had purposely failed to inform the incident to the Vung Tau Port Authority and the Zone III Search and Rescue Coordination Center when it occurred, causing the rescue team to arrive late and effectively sealing the fate of the nine passengers who drowned.

On October 21, lawyer Ha Hai, with the authorization of the families of the victims, sent a document to Viet-Sec demanding that it pay compensation to these families, since it had wrongly used the speedboat.

The victims’ families said three months has passed since the tragic incident without any compensation paid to them by the company.

Before the accident, the speedboat, under management of the Ba Ria-Vung Tau Port Border Gate Station, was at Viet-Sec for repair. But on August 2, the company, without reason, allowed Vung Tau Marina to borrow the vessel to transport passengers from Vam Lang Port in Go Cong Dong District, Tien Giang Province to Vung Tau.

The vessel, overloaded with 30 passengers, was sunk by strong waves off Long Hoa Commune, Can Gio District, 20 km from Vung Tau, at 7 pm on August 2.

However, it was not until 9 pm that the Vung Tau Port Authority and the Regional Maritime Search and Rescue Coordination Center No. 3 were reported about the case. Thirty minutes later rescuers were sent to the scene but they could rescue only 21 people; the other nine had already drowned.

Searches for the victims were launched and the nine victims’ bodies were found days later.