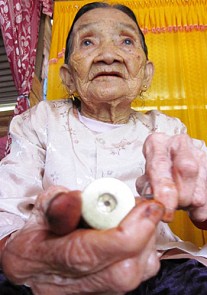 A mountain herbalist in Vietnam

Lacking medicine and a hospital, patients in remote and mountainous areas such as Minh Hoa District of central Vietnam’s Quang Binh Province must rely on wild herbs from nearby forests for their ailments.

Knowledge of herbal properties is passed down from one generation to the next.

Soldiers of the Vietnam People’s Army were given herbal remedies for injuries, malaria, insect and snakebite and other diseases when they were fighting on Ho Chi Minh Trail along the mountain chain of Truong Son, the ‘backbone’ of Vietnam.

Now almost 40 years since the end of the U.S. war in Vietnam, locals of the mountainous areas in the central region such as Minh Hoa District almost lead their lives in the same simple manner.

Although the area is more developed now, evidence of the war, which swept through the area for two decades, is still abundant.

Herbal cures from an elderly woman

It once took days of walking through forests and crossing streams to reach Minh Hoa, but now it lies at the crossroads of Truong Son Trail and Asian Highway, surrounded by scenic landscapes.

The house of Dinh Thi Dien is nestled under a canopy of ancient trees in Yen Hoa Village of Hoa Tien Commune in Minh Hoa. It is well known to those who visit Truong Son Trail in Minh Hoa.

Dien is now 93 years old, although she is still able to recall stories of wartime and teach younger generations about herbal medicine.

From her house near Truong Son Trail, a mountain path leads to the Binh Tram (military post) cave, once the command post of the High Command 559.

During wartime, her house was a common stop for soldiers traveling from North to South for food, medical treatment, and rest.

“Injured soldiers and those who were suffering from malaria and snakebite would lie in my front garden awaiting treatment,” she recalled.

“I had to cut my way through the forest in order to find the wild herbs I needed to cure them. Once they recovered, they left me. I didn’t know where they went. I just cried when they left. I loved them as my sons.”

Now, her house is the regular rendezvous for members of the Herbal Medicine Club in Yen Hoa.

They come to her house to learn of the properties of herbal plants, which grow wild in the nearby forests.

She is considered an encyclopedia of the herbal medicines of Truong Son Forest.

When she was young, she learned these remedies from the older generations of the Nguon ethnic minority people, who have a unique culture and spoken language.

The ancient herbal remedies of the Nguon people have surpassed Truong Son, reaching cities across the nation.

Now Dien is passing on the remedies to her son, Dinh Van Sang. She also passes down advice on how to use such powerful knowledge. Sang said, “She asked me and other members of the club to always give free treatment to poor people.”

She also said, “As an herbalist, you must go whenever you are invited to help.” Sang fought for the Vietnam People’s Army and was the only survivor of his artillery squad after a fierce battle in Truong Son. He retired and is now working as an herbalist after learning the trade from his mother.