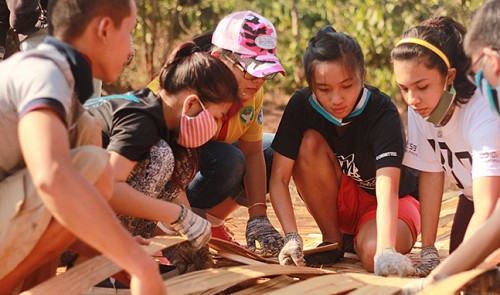 A foreign-trained young man has given up his well-paying job in Singapore to launch and develop a model of service learning in Vietnam, which benefits both disadvantaged beneficiaries and volunteers.

Pham Van Anh, a man in his early 20s, has helped change local young volunteers’ thinking with his service-learning model.

In early 2009, while Anh, also known as Harry, was majoring in electrical engineering at Singapore’s prestigious Nanyang Polytechnic University, he chanced upon an article on a Singaporean sophomore named Cindy Chng at the same school.

Chng had led a group of Singaporean high school students to Thailand, where they successfully conducted a community service program.

After a brief meeting on the metro, the two young people agreed that they would launch a pilot community model in Vietnam together.

Anh and Chng divided their group of 40 Singaporean students into two smaller groups and performed volunteer charity activities at Huu Nghi Village for Agent Orange kids and an orphanage in Hanoi for 10 days.

“The Singaporean students are highly responsible and adaptive. The AO mentally challenged kids had great difficulty closing their mouths, so rice kept falling out. Although they had lived in a clean environment since they were young, the Singaporean students were patient and spoon-fed the kids without a single complaint,” Anh recalled.

Anh questioned why the youth from a wealthy family background and a developed country took great pains to care for the underprivileged kids.

Chng then explained that the students learned from and improved themselves through serving the community and doing all they could for poor, challenged and vulnerable people.

In August 2011, Anh represented Vietnam at the World Youth Conference in Turkey, where he presented his service-learning model and offered to help volunteers from other countries take part in his model in Vietnam.

Later that year, Anh decided to quit his job with a US$3,500 monthly salary at Chartered Semiconductor- Global Foundries Co., which produces chips for major electric appliance companies, and returned to Vietnam to officially launch his model.

With his first difficulty being capital shortage, he had no choice but to work considerably harder than usual at his former company for three more months to earn money for his cause.

In the meantime, he tried to persuade Singaporean universities to sponsor his service-learning project.

In return for the sponsorship, he will take Singaporean students to poor areas in Vietnam and provide them with training and inspirational talks on volunteering activities.

From his trips to Laos, Bangladesh, Indonesia and Thailand, Anh learned that for long-run development, he needed to build his own community center, which uses local construction materials.

The young man then traveled to Di Linh District’s Gia Bac Commune in the Central Highlands province of Lam Dong.

He designed his own center with soil walls and traditionally patterned bamboo.

Architects advised him against implementing his design, and persuaded him to build his center with brick.

However, the Singaporean universities enthusiastically supported his center design and service-learning model.

In April 2012, construction began on the center and was completed, against all odds, in just one year.

Anh’s center receives dozens of student delegations from other countries each year.

Apart from bookshelves, toys and classrooms, its library is also home to collections of artifacts and archives on the cultural values of the K’Ho ethnic minority people.

Building a library is one thing, but encouraging local people and kids to visit it is quite another.

Nguyen Duoc, one of Anh’s volunteers, recalled that Anh went to great lengths to cultivate a reading culture among local kids, particularly ethnic children, by riding his bike with a book shelf and balloons on it to hamlets and organizing book fests and game stalls to attract kids.

Some children began to show interest, and gradually brought more of their friends. Several parents now send their children to spend all day at the library.

Anh also founded ECO Vietnam Group (EVG), which recruits and trains Vietnamese volunteers, from simple things such as Singaporeans’ abstention from pork, to how to tactfully converse with poor people and arouse and maintain kids’ interest while teaching them.

He and his volunteers have initiated various charity programs in provinces such as Dong Thap and Ben Tre in the Mekong Delta, ranging from building homes, cleaning lakes, repairing roads to teaching local kids and hosting “rice with meat” meals for poor households and kids.

Anh stressed that one of his principles is understanding the people he is helping and what their needs are.

He once held sessions in Lam Dong Province during which he handed out used items for free, but no one came.

“Poor people have high self-esteem. They want to buy the items with their own money, although they may have very little. So what we’re doing is giving them fair treatment without hurting them at all,” Anh concluded.