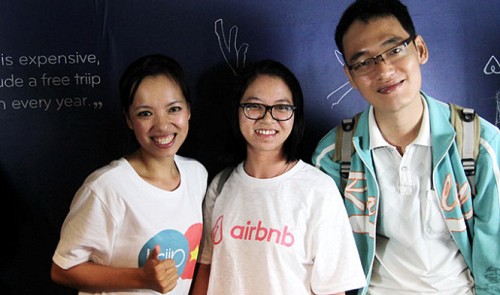 A young Vietnamese woman and her partners have served as an effective intermediary between tourists and tour operators and aim at designing global tours crafted by local experts.

For Lam Thi Thuy Ha, traveling is not only about doing sightseeing at places of interest, staying in luxury hotels or relishing in delectable delicacies.

The product is available in 35 countries and 63 cities worldwide, Ha – the creator – proudly said.

“Triip me” will represent Vietnam’s startup businesses at a startup entrepreneur meeting, to be held in Switzerland in February 2015.

This is the award Ha’s product earned from winning the preliminary round of Seedstars World’s 2014 Startup Competition, which was held in Ho Chi Minh City in September this year.

Seedstars World is an exclusive startup competition in emerging markets. Only high-quality startups can receive an invitation and are chosen following a strict selection process, the organization says on its website.

A graduate in Oriental Studies from a Ho Chi Minh City university, 28-year-old Ha discovered herself and the outside world with tourism.

As a sophomore in 2006, she founded “Sai Gon Hotpot,” a popular network of local volunteers who serve as guides to international tourists for free in the southern city.

The club draws a few thousand volunteers throughout the city, who offer tourists meticulous, free guidance on where to go, play and eat, as well as wholehearted assistance.

“The job has given me and the other volunteers countless rewarding experiences of friendship and self-discovery, as well as opportunities to sharpen our English skills,” the young woman shared.

Ha then realized that most tours are based on cliché ideas. The majority of current tours focus on sightseeing and culinary delights, while a limited number of newer ones offer adventure and thrill-seeking experiences.

She then hit the road and kept thinking about how to design unique tours. Ha was once invited to one of her friends’ homes in the Mekong Delta.

Though the tour itself did not boast famed scenic spots or recreation, her trip was memorable. She stayed with the friend’s family, and went fishing and picked fruit in the orchard.

Her friend’s grandparents also sang “cai luong” (Vietnamese opera popular in the south) tunes at night. “Triip me” came into being soon after the trip.

Three years after launching the “Triip me” website, Ha started up her Triip me Tourism Co. in June last year, even though she had a day job at the time.

“I was concerned that if I didn’t focus entirely on my fledgling company and the numerous difficulties it encountered, ‘Triip me’ might slip away from me. So I later decided to quit my job to devote all my time and energy to developing it,” she shared.

A major difference between “Triip me” and many similar websites and companies is Ha’s aim at global tour guides, who are unprofessional natives but are devoted and always on the lookout for new things.

“As for me, a guide isn’t merely an employee, but is also a companion and friend to holidaymakers. The double ‘i’ in ‘Triip me’ is indicative of the spirit. ‘i’ implies solitary travelers, while ‘triip’ sounds like a prolonged exclamation with the guides’ company,” she said in explaining her company’s name.

Ha’s ambition is to establish her company as a global trademark with Vietnamese uniqueness.

She hopes that in the future her website will be popular globally for offering unique native, premium traveling experiences.

She aims to make her website and services available throughout Asia by the end of next year and make sure that her services will cater to 98 percent of the daily demands and tastes of customers by then.

“The hard part isn’t looking for global tour guides, but finding communities who are passionate about traveling and willing to share their experiences with others,” Ha noted.

To minimize risk for her clients, Ha and her staff always conduct interviews with tour providers.

“Triip me” also confirms the identities of tour providers and buyers through such systems as PayPal, MasterCard and information from personal accounts.

When clients order tours, “Triip me” will send emails and make phone calls to confirm with the tour operators or guides and forge connections between the two sides before departure.

Apart from sightseeing, the tours to Vietnam which Ha’s firm has designed offer tourists opportunities to experience sipping coffee or beer while sitting on the floor or sidewalk, learn the traditional delicacies of Vietnamese families, or stay with ethnic minority households in stilt houses in the northwestern region before trying their hand working on terraced fields the next day.