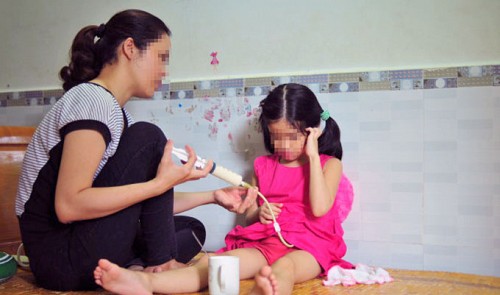 A five-year-old girl in Ho Chi Minh City could have her esophagus replaced using parts of her stomach after accidently drinking bleach, causing severe burns to her throat.

N.H.K.D., a young girl living in District 12 of the southern metropolis, may have to undergo surgery in order to have her gullet replaced due to the permanent damage resulting from drinking fish tank bleach.

The accident occurred about two months ago when D. unwittingly took a sip of the chemical concoction while playing with her friend at her house, H.T.M.D., the girl’s mother, recounted.

After hearing D.’s scream, her mother rushed into her room and found her daughter vomiting while her lips and mouth were burnt.

The young victim was then admitted to the emergency room of a children’s hospital.

According to Tran Thanh Tri, head of the department of general surgery at the infirmary, D. suffered the most severe case of esophagitis ever recorded at the facility.

Results of a gastrointestinal endoscopy showed that the patient’s entire esophagus had been damaged, Tri said, adding that doctors had to cut open her stomach to insert a tube that could help transfer food directly into the girl’s system.

After three to six months, the practitioners will re-evaluate the severity of D.’s injury before deciding on a permanent measure to treat her condition.

Tri said that the case would require a thorough consultation by many experts to ensure the best solution.

Meanwhile, Bui Hai Trung, one of D.’s doctors, said that there was a high chance that the young girl would need to have her gullet replaced with part of her stomach.

In these cases, patients are only allowed to consume small portions of food in their daily meals to prevent the new digestive system from putting pressure on other organs, namely her lungs, heart, bronchus, and others.

According to Dr. Trung, the hospital has dealt with many similar cases after young patients have drunk boiling water or other types of chemicals.

These incidents happen due to carelessness and a lack of attention from adults.

It is recommended that parents keep hazardous liquids out of the reach of their children in order to prevent such regrettable accidents from happening.

The Middle and Affluent Class (referred to as MAC) in Vietnam is the fastest-growing in Southeast Asia and with that growth comes a thirst for houses, luxury goods, and, naturally, international travel