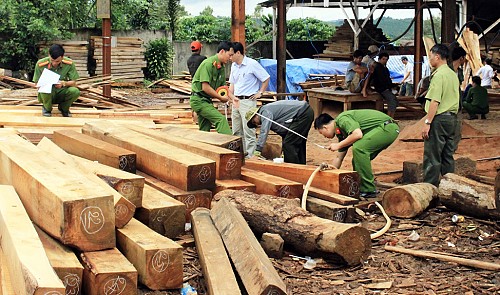 Two members of an illegal logging ring have been detained while their leader remains wanted by police in Lam Dong Province, located in Vietnam’s Central Highlands.

Ha, who left his hometown in Lam Dong, was the ring leader while Tuan and Thanh were charged with transportation and distribution of the timber.

Tran Tho, an essential link in the unlawful operation, has also turned himself in to the police, officers added.

The suspects claimed that they were working for Ha, adding that the timber was to be transported to Bu Dang District in the southern province of Binh Phuoc.

In a related development, one forest protection official in Dak Lak Province, also situated in the Central Highlands, is suspected of owning three cubic meters of wood without legitimate documents.

Forest rangers in Krong Bong District, Dak Lak, in coordination with local police, carried out a raid on the wood shop of Pham Van Son, and discovered the undocumented timber.

Son stated in his report that he had been keeping the wood for Nguyen Thanh Dung, deputy head of the Krong Bong Forest Protection Office, since March.

Y Te Bkrong, head of the Forest Protection Office, affirmed on Tuesday that the case was being investigated.

“If Dung is proven to have possessed the timber against the law, he will be immediately sanctioned,” Bkrong said.