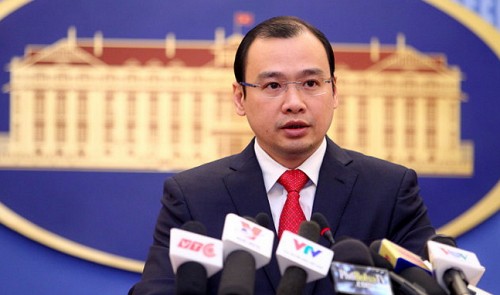 Vietnam’s foreign ministry said on Tuesday that it embraced the ruling by a tribunal in The Hague set to preside over East Vietnam Sea disputes between China and the Philippines.

In a statement released at 5:35 pm, a spokesperson for the Vietnamese Ministry of Foreign Affairs, Le Hai Binh, said Vietnam welcomed the arbitral tribunal's ruling earlier the same day, adding that the Southeast Asian country would release a separate statement concerning the decision.

The arbitral tribunal was constituted in January 2013 under Annex VII to the 1982 United Nations Convention on Law of the Sea (UNCLOS) to preside over an arbitration case brought by the Philippines against China concerning issues in the East Vietnam Sea.

The Permanent Court of Arbitration (PCA) on Tuesday ruled in favor of the Philippines, rejecting China’s nine point territorial and economic claims across large swathes of the waterway.

“Vietnam confirms its consistent stance on the arbitration case which was fully reflected in the statement to the arbitral tribunal by the Ministry of Foreign Affairs on December 5, 2014,” Spokesperson Le Hai Binh said.

“In this spirit, Vietnam strongly supports the resolution of disputes in the East Vietnam Sea through peaceful measures, including diplomatic and legal procedures, without using or threatening to use violence, in accordance with international law, including the 1982 UNCLOS,” Binh said. “[Vietnam supports] the maintenance of regional peace and order, and security, safety, and freedom of navigation and overflight in the East Vietnam Sea; respecting the rule of law at sea and over oceans.”

“On this occasion, Vietnam continues to assert the sovereign rights over Hoang Sa [Paracel] and Truong Sa [Spratly] archipelagoes, internal and territorial waters, sovereignty and jurisdiction rights over our exclusive economic zone and continental shelf determined in the 1982 UNCLOS, as well as all the legal Vietnamese rights and interests connected to the geographic structures of Hoang Sa and Truong Sa,” the spokesperson said in his statement.