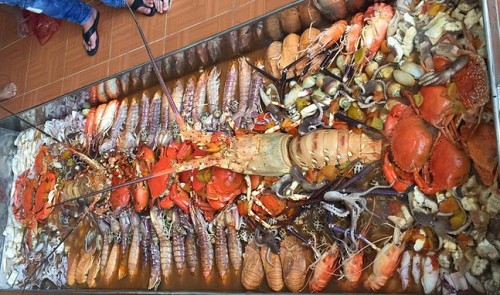 If you have US$2,000 laying around for a birthday party, why spend it on typical restaurant buffets and boring old feasts when you could blow the whole budget on a single new and original idea?

The Flying Tigers superbike club did just that, funneling their money into a one-of-a-kind, two-meter long hotpot complete with VND50 million (US$2,232) worth of lobsters, clams, crabs, mantis shrimp, snails and fish.

Of course, no hotpot is too big or too bold to showcase on social media, and the club’s members, motorcycle enthusiasts from Vietnam’s Mekong Delta, made sure that proof of their celebration was uploaded on Facebook for all to envy.

One member of the club living in the southernmost province of Ca Mau revealed that the lobsters weighed 3.5kg each, and the other ingredients included 5kg of giant freshwater prawns, 10kg of famous Ca Mau crabs, 20kg of oysters, and 55kg of other types of seafood.

He said 20 club members had contributed towards the seafood in celebration of a senior club member’s birthday and that the total cost of the dish was nearly VND50 million, with each member having donated approximately VND2.5 million ($112).

The giant seafood hotpot caused a stir among local Facebook users, with many posting mixed responses to the unusual birthday celebration.

Some hailed the idea as an original use of Ca Mau’s famous seafood, while others raised their eyebrows, believing that it was a waste of money to spend VND50 million on a hotpot that would definitely not be finished.

A club member admitted that the hotpot was too big for the 20-member party.

“We only ate part of it,” he said, leaving out details regarding the fate of the leftovers.