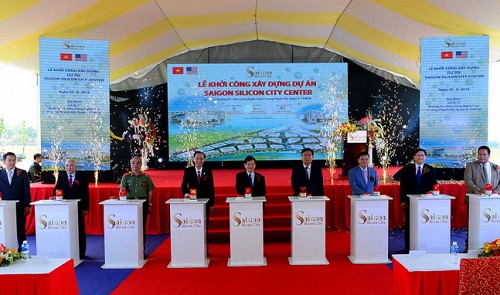 Construction started on Tuesday on Saigon Silicon City Center, the heart of a Ho Chi Minh City-based hi-tech complex modeled after Silicon Valley in the U.S.

The VND480 billion (US$21.43 million) building is a research and development center which is part of the Saigon Silicon City project located inside the Saigon Hi-Tech Park in District 9.

The center is also expected to facilitate a healthy and friendly investment environment modeled after Silicon Valley in the U.S.

The groundbreaking ceremony for the Saigon Silicon City project had been held last November.

The US$40 million ‘Vietnamese Silicon Valley’ occupies a total of 52 hectares, according to the developer, Saigon Silicon City JSC.

The project will be rolled out in two phases and is expected to near completion in 2020.