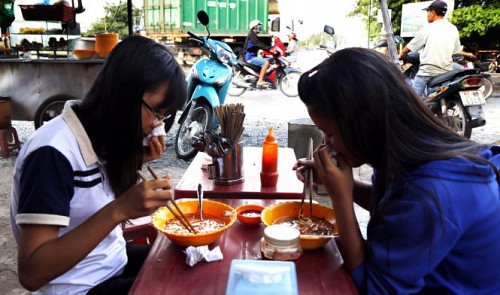 The lives of residents in the southern part of Ho Chi Minh City have been badly affected by a foul smell whose origin still remains unclear.

Those living in that region – including the Phu My Hung township – have recently reported a disturbing smell coming out of nowhere and covering the entire area, leaving negative impacts on their daily life.

According to Nguyen Huu Tuan, a resident in Phu My Ward, District 7, an odor similar to a garbage stink usually lingers between 7:00 pm and 8:00 pm.

Tuan asserted that no facility in his neighborhood could possibly be the source of the foul smell.

Ho Van Kha, a dweller at Gia Hoa Residential Area in Binh Chanh District, stated that the smell is present in the atmosphere every evening and afternoon or whenever wind blows toward his neighborhood.

Speaking to Tuoi Tre (Youth) newspaper, Nguyen Duc Binh, residing in Phong Phu Commune, Binh Chanh, complained that the odor had become unbearable, adding that he had suffered the unpleasant situation for years.

“We have scouted a large area for the origin of the smell but yet to find it. Local residents are forced to stay inside whenever it hits the area,” Binh said.

Where does the smell come from?

Tuoi Tre journalists have carried out a probe into several facilities in southern Ho Chi Minh City which could potentially be the source of the pong.

There was no disturbing stench at the Binh Hung Wastewater Treatment Plant in the namesake commune in Binh Chanh District despite nearby residents’ reports of the mysterious stink.

Pho Quoc Thien, deputy director of the factory, confirmed that its operations have not released any odor thanks to thorough processing procedures.

According to Nguyen Quoc Thai, director of the Ho Chi Minh City Urban Drainage Company which manages the Binh Hung plant, the facility is monitored three times a week for quality assurance.

He asserted that the stench could not stem from the factory.

No smell was noticed at the wastewater treatment facility in Phu My Hung, with its employees affirming that everything works perfectly normal there.

During an interview with Tuoi Tre, a climate expert claimed that the south-westerly wind is often active in August, which could have carried the odor along its route.

Located southwest of the affected area, the Da Phuoc Waste Treatment Complex in Binh Chanh has been accused by local citizens of being the culprit, with the plant receiving 5,000 metric tons of rubbish on a daily basis.

According to Nguyen Toan Thang, director of the municipal Department of Natural Resources and Environment, a comprehensive inspection has been carried out in the treatment zone.

Extensive tests will be performed, whose results will indicate whether or not the facility has been exuding the stench, Thang said.