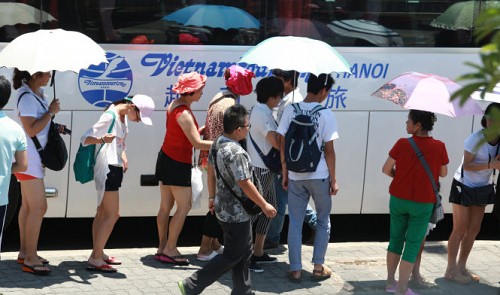 In order to combat disinformation about its tourist attractions, the People’s Committee of Nha Trang City has released a code of conduct for tourists.

Nha Trang, the capital of the south-central province of Khanh Hoa, is a coastal city famous for its beaches and historical sites.

The city’s steady stream of local and international tourists has transformed it into one of Vietnam’s most popular tourist destinations, presenting the administration with a mix of new rewards and steep challenges.

On Tuesday, Nguyen Sy Khanh, vice-chairman of the People’s Committee of Nha Trang, stated that the code of conduct aims to transform the city into a “civilized tourist city.”

One of the key points in the code of conduct urges visitors to avoid “giving false information,” a clause attempting to quell rampant disinformation from Chinese tour guides who allegedly distort the history of Nha Trang and its historical sites.

“We are installing information bulletins in multiple languages at tourist attractions in order to give visitors a more comprehensive understanding of each site.

"Additionally, we plan to have tour guides at tourist attractions to explain the history and culture of those attractions without distortion,” Dinh Van Cuong, director of the Office of Information and Culture of Nha Trang, said.

The code of conduct also extends to social media platforms, such as Facebook and Twitter, though Khanh admitted that enforcement of the set of principles on social media will be a challenge for authorities.

“We’re mainly just encouraging and promoting good behavior, but we will punish those who violate the code of conduct in accordance with the severity of their violation. These are not empty words,” Khanh said.

Before Nha Trang released its code of conduct, several other cities, including Da Nang, had published similar documents.

“It’s difficult to enforce sanctions for violations of the code of conduct, as many violations included are not infringements of state law.

"However, we still caution tourists so that we can create a more civilized tourist environment, limit violations, and raise tourist awareness.

"Violations in public will be fined, depending on each case,” said Tran Chi Cuong, vice-director of the Da Nang Department of Tourism, the agency tasked with creating Da Nang’s code of conduct. “The code of conduct needs to be suitable to each local area and possible to implement," said Le Huu Minh, vice-director of Thua Thien-Hue Department of Tourism.

"There should not only be prohibitions, but also solutions to ensure that tourists follow the code of conduct without feeling uncomfortable.

"For example, if you require visitors to wear formal clothing at sacred places, then you should have that kind of clothing available for free at the tourist attraction."