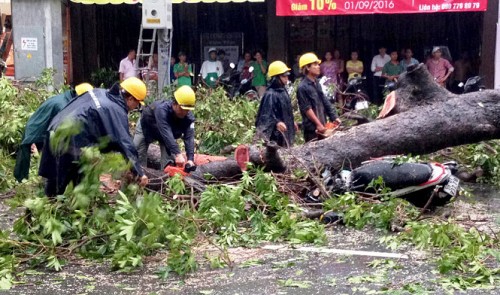 A motorbike driver was severely injured as a falling tree slammed onto him in a squally downpour in Ho Chi Minh City on Tuesday, the second major accident involving uprooted trees in the southern metropolis in three days.

Huynh Minh Cuong, 34, was riding in the rain on Su Van Hanh Street in District 10 when a ten-meter-tall khaya tree uprooted and fell onto him, according to eyewitnesses.

Many local residents rushed to lift the trunk to pull the victim out and admit him to a local hospital for emergency.

“The tree was shaken with cracking sounds and suddenly fell, slamming on the man,” an eyewitness recounted.

The tree, one meter in diameter, also severely damaged Cuong’s vehicle and hit a nearby car.

Police arrived immediately at the scene to regulate the traffic flow, while public service workers cleared the falling tree.

Previously, an age-old tree also fell over and killed a man as it was uprooted during a torrential downpour in Ho Chi Minh City on Sunday.

Tu Minh Khai, an auto shop attendant, suffered serious head injuries as the tree, one meter in diameter and 20 meters in height, fell onto him.

The victim was rushed to hospital but pronounced dead shortly after.

The falling tree also damaged a car and some other motorbikes.

The glass windows and facades of four houses in the area were broken and destroyed.

The heavy rain also caused six other trees in District 5 to lose their branches or fall down, but there was no other significant damage.