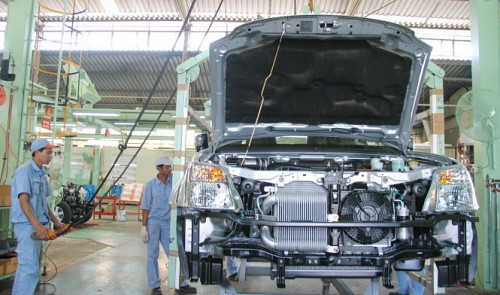 Vietnam will never be able to improve its industrial development based on an obsolete mindset formed decades ago, one economic expert has warned.

Dr. Vu Thanh Tu Anh, director of research at the Fulbright Economics Teaching Program in Ho Chi Minh City, has told Tuoi Tre(Youth) newspaper in an interview published on Monday that Vietnam really needs a new way and mindset of industrial development in order to survive the Industrial Revolution 4.0.

The fourth industrial revolution will be characterized by innovations in areas like driverless cars and smart robotics, virtual reality technology and the Internet of things.

Vietnam’s decades-old mindset of industrial development, according to Dr. Anh, is that the government chooses a few industries to prioritize development for and makes itself the main driver of growth in those prioritized sectors.

The problem with this mindset is that most of the government’s selections are primarily wishful thinking, and “whenever a state-run firm suffers losses, as per the high-profile examples of Vinalines and Vinashin, it is costlier for the state to handle.”

Dr. Anh said it is illogical to rely so heavily on state-owned enterprises for industrial development, as foreign-invested and private sector companies collectively accounted for more than 85 percent of the economy’s total industrial output.

Asked if it is time for such an outdated mindset to be changed, Dr. Anh agreed, expressing his belief that the government already knows it can no longer continue on this same old road toward industrial development.

“Still, the government is in the dark about what new mindset it should actually take,” he said. “This is worrisome, particularly at a time when multiple interest groups are allegedly behind many strategies and industrial planning.”

Dr. Anh added that even the way the government chooses to boost development in some key industries is problematic.

“There is nothing wrong with the state wanting to develop the steel industry in order to have affordable raw materials for other domestic sectors,” he said.

“But trying to achieve those goals through such projects as Formosa and [the planned] Ca Na may instead result in negative outcomes.”

The expert explained that Vietnam is offering numerous incentives to large-scale steel projects, which are supposed to invest heavily in environmental protection.

The Formosa plant caused widespread fish deaths in central Vietnam in April, while the Ca Na project, yet to be implemented, has raised similar environmental concerns.

How to make changes

Dr. Anh said the first thing that needs to be changed is the way the government sees the three economic sectors, foreign-invested, private and state-owned.

“This must be changed to create a more transparent playground where private, small- and medium-sized enterprises will have more freedom for competition and development.”

Dr. Anh added that small- and medium-sized enterprises do not need tax breaks or other incentives from the government, “what they need is to be recognized as having a key role in the economy.”

The next reform the government should make, according to the expert, lies in the way policies, plans and strategies are prepared and enacted.

As for the constitution, Dr. Anh said the government should step aside in some fields in order to give more space for private companies to grow.

“The government should only do what [private] businesses do not want to do, or are unable to do,” he said.

“Why should the government try to keep state-run enterprises in fields like dairy, rubber and textiles?”