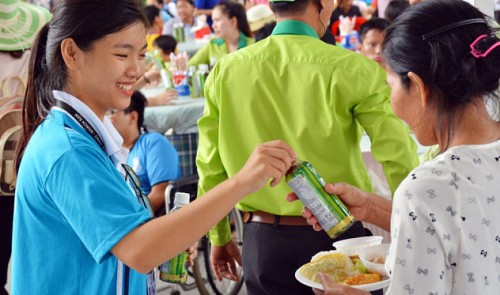 Over 7,000 physically challenged people joined a giant buffet at an amusement park in Ho Chi Minh City on Saturday, with free admission to games granted to them.

The buffet set a record in Vietnam in 2007, with the participation of the largest number of disabled people.

The party on Saturday was part of the 17th charity festival held at Suoi Tien Amusement Park in District 9, estimated to cost VND1 billion (US$44,160).

More than 7,000 people with disabilities, coming from 16 provinces and cities nationwide, were helped by over 1,000 volunteers to enjoy the impressive meals, prepared by hundreds of cooks, at Suoi Tien.

The buffet was arranged into eight sections along an inner road dedicated to the festival at the park.

Tran Van Hung, from a children support center in Go Van District, told Tuoi Tre (Youth) newspaper that he had met many peers at the festival, which gave him a good opportunity to make new friends as well.

“This is a chance for us to chill out after days struggling with our daily life,” he said.

During the 17th charity festival, physically challenged people were given free admission to games at the amusement park.