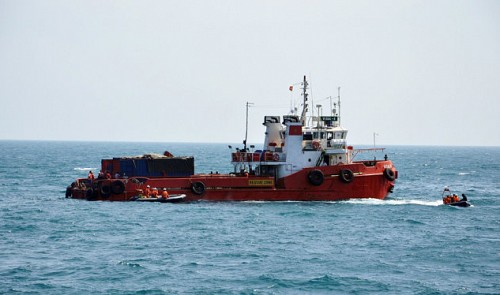 An oil tanker operated by a subsidiary of Petrolimex, Vietnam’s largest fuel wholesaler, has been identified as the culprit in the deadly sinking of a cargo ship earlier this week, the transport ministry said Friday.

The vessel Hai Thanh 26, carrying 11 crew members while transporting clinker from the northern city of Hai Phong to the southern city of Can Tho, capsized after being hit by another ship off Vung Tau City near midnight on March 27.

The ship captain Nguyen Viet Thang and deck officer Hoang Tien Khoi managed to escape from the ship and were eventually rescued, while nine crewmen were unaccounted for when the clinker vessel began sinking.

As of Saturday morning, all of the nine missing crewmen were confirmed dead, with their bodies already found.

Thang and Khoi were rescued by oil tanker Petrolimex 14, which was later identified as the very ship that sank Hai Thanh 26, the transport ministry said at a press conference on Friday.

Petrolimex 14 is operated by Vitaco, a subsidiary of Petrolimex Tanker Corporation, which is in turn the sea transportation arm of the fuel giant Petrolimex.

Later on Friday, Truong Van Minh, deputy general director of Vitaco, admitted the collision between its Petrolimex 14 and Hai Thanh 26.

However, Minh said it cannot be concluded that whether Petrolimex 14 or Hai Thanh 26 was at fault in the accident until a final investigation report on the sunken ship, which has yet to be retrieved, is available.

Vitaco has expressed its condolences to the families of the affected crewmen and handed over financial supports to them.

As of Friday afternoon, rescuers have found six of the nine missing crewmen and taken their bodies to shore.

The deceased include Hai Thanh 26 first officer, the chief engineer, an engine officer and three sailors.

At 9:00 am on Saturday, rescuers said they had also found the bodies of the other three, including one engine officer, one sailor and the chief cook.