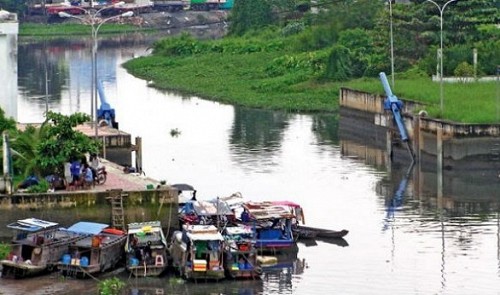 A number of Japanese investors have agreed to help revitalize the eight-kilometer Xuyen Tam Canal in Ho Chi Minh City after a meeting with city leaders in Tokyo on Saturday.

The meeting was part of the ten-day working agenda of a delegation of Ho Chi Minh City officials, headed by Party chief Dinh La Thang, in Japan to boost ties and seek cooperation opportunities for the southern Vietnamese metropolis and Japanese cities and businesses.

The project, despite its small investment, is vital to the livelihood of citizens living along the polluted canal, and is among the seven breakthrough programs outlined by the municipal Party Committee in 2015, Thang said.

The Xuyen Tam Canal, which snakes eight kilometers through Binh Thanh and Go Vap Districts, measures between 17 and 42 meters in width.

The canal is the destination of about 40 percent of household sewage in Binh Thanh District, receiving around 40,000 cubic meters of untreated wastewater on a daily basis.

A VND123 billion (US$5.5 million) plan to renovate the canal has been in place since as early as 2002, but was never implemented in reality due to multiple unfavorable circumstances.

In March last year, the administration of Ho Chi Minh City approved a proposal to carry out a massive renovation project on the canal at a cost of VND5 trillion ($223.21 million), 70 percent of which would be funded by Japan International Cooperation Agency (JICA) loans.

Party chief Thang promised Japanese investors that Ho Chi Minh City authorities will have site clearance finished within 15 months so that work on the project could begin as early as this year.

The construction plan would be drafted by the municipal Department of Transport and become available next month, upon which it would be submitted to the city’s administration for approval, Thang said.

“Ho Chi Minh City is committed to commencing work on the canal in 2017 and having it done by 2020,” the Party chief told Japanese investors on Saturday.