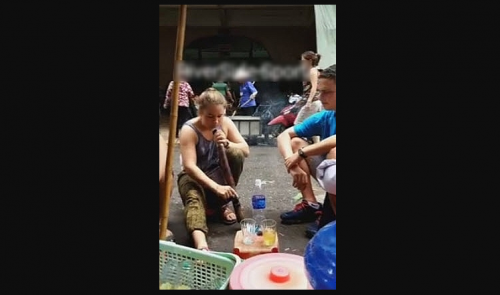 A video of a foreign female tourist falling on her back after smoking thuoc lao, or Vietnamese wild tobacco, in the Old Quarter in Hanoi has gone viral on Facebook, trigging curiosity among many about what caused her to temporarily lose consciousness.

Many international tourists cannot resist taking a hit of thuoc lao, a popular tobacco among Vietnamese northerners, though some quickly regret their decision once the potent punch of the ‘specialty’ tobacco’s nicotine hits their lungs.

In the video, first posted to a Facebook account named Pham Tien Duat, a young woman is seen smoking the tobacco using a traditional Vietnamese bamboo pipe while sitting on a small plastic stool.

Traditionally, the bottom of the pipe is filled with a small amount of water and thuoc lao is pressed into the bowl.

As the smoker lights the tobacco and inhales, a flood of nicotine is absorbed into the bloodstream, inducing a dizzy spell that can last several seconds.

Just seconds after taking a hit from the pipe, the foreign woman in the video immediately falls out of her chair while her body shakes on the ground.

Another foreigner rushes over to help the woman as some Vietnamese men can be heard saying “it’s alright.”

The intense reaction is no surprise to locals. Heavy cigarette smokers often have trouble smoking thuoc lao due to its intense volume of smoke and high nicotine content. In severe cases, the wild tobacco can even result in nausea and vomiting.

The 55-second video ends with the woman regaining consciousness while a Vietnamese man suggests that someone bring her a glass of water.

The tourist’s facial expression looks as if she was unaware of exactly what had happened.

The video was filmed near Dong Xuan Market at 2:30 pm on Wednesday.

In northern Vietnam, thuoc lao is most commonly smoked after a meal on a full stomach to "aid in digestion", or along with green tea or local beer.

Thuoc lao, scientifically known as nicotiana rustica, is a rainforest plant in the Solanaceae family.

A potent variety of tobacco, the high concentration of nicotine in its leaves also makes it useful for producing pesticides.