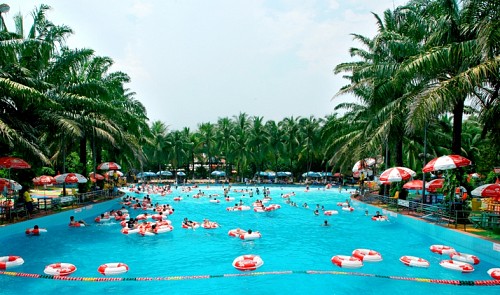 The managers of Ho Chi Minh City-based Dam Sen Water Park have extended their apologies to visitors after treating them and their children to an inappropriate performance featuring dancers in skimpy bikinis last weekend.

The mangers also gave a detailed explanation on the situation, which has caused widespread outrage after a video of the scantily-clad females showcasing suggestive movements and positions at the District 11-based park went viral online on Sunday.

According to the Dam Sen Water Park management, several new shows have been added to diversify activities at the venue as the summer had began, including the dance performance on the fountain-equipped ‘water stage,’ a balloon shaping show and a flamenco concert.

“We had tested the water stage on June 4 with a plan to have it held every Sunday afternoon,” the apology letter reads.

The dancers were supposed to wear bikinis and “treat the audience to gentle movements such as belly dance or aerobic steps to enliven the atmosphere and encourage visitors to join.”

“However, the dancers ended up performing improper, sensual moves unsuitable for children and against what they were supposed to do,” the directors said.

The park asserted that the pilot show was also the last to be held on the fountain stage following the scandal it sparked on social media.

“This is a lesson learned,” the letter reads.

“Dam Sen Water Park will replace that show with fitting playgrounds for kids such as drawing or singing contests.”