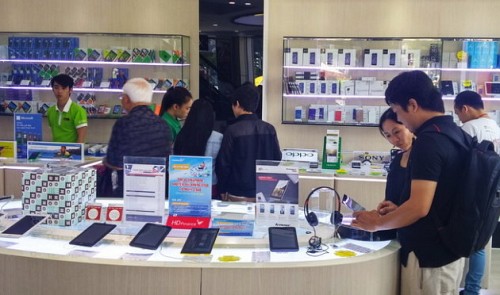 Ten out of every one thousand smartphones sold worldwide in the first quarter of 2017 were to Vietnamese users, who collective spent nearly VND20 trillion on the hi-tech devices, two separate reports show.

Vietnamese consumers collectively bought 3.6 million smartphones in the first three months of the year, compared to the global shipment of 347.4 million units, according to the International Data Corporation’s Worldwide Quarterly Mobile Phone Tracker.

In the Jan-Mar period, people in the Southeast Asian country spent a combined VND19.8 trillion (US$872.25 million) buying the handsets, according to a separate report by GfK.

In the first quarter of last year, Vietnam’s smartphone shipment reached 3.47 million units, worth a total of VND17.8 trillion ($784.14 million).

As a new ‘tradition’, the Vietnamese tend to buy new smartphones to celebrate Tet, or the Lunar New Year that begins late January or early February, with purchases cooling down the following months.

The Gfk report points out that most Vietnamese consumers still prefer the entry-level, affordable handsets – those that cost between VND2 million ($88) and VND3 million ($130). Coming next on the best-seller tally are those in the price ranges of VND4.5 million ($200) - VND6 million ($265) and VND6 million - VND10 million ($440).

More than 90 percent of smartphone shipments in Vietnam in Q1/2017 are Android devices, with the iPhone accounting for only eight percent of the share.

On the global scale, the 347.4 million milestone represents a 4.3 percent year-on-year rise, according to IDC.