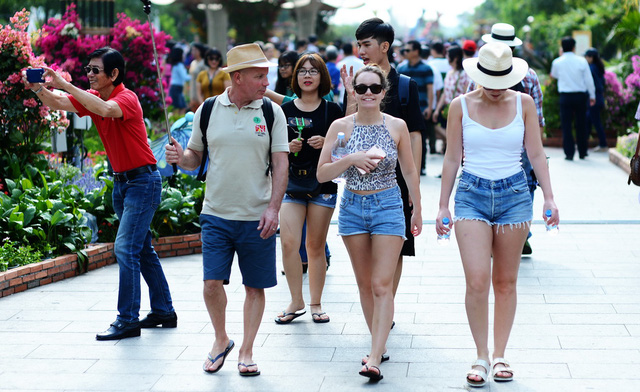 A problem many countries would love to have

We see Thailand heading up the list in total overall international arrivals followed by Malaysia and Singapore – no surprise there. All three countries have highly developed tourism sectors for several decades. Indonesia generated a lot of international interest last year finishing with the 4th highest number of visitors.

At this rate nearly 17 million international visitors will be welcomed to Vietnam in 2018 and over 20 million in 2019.

World Heritage Sites Ha Long Bay, My Son Ruins, and many others are generating massive international interest as well as events such as the APEC Summit held late last year in Da Nang. Many friends overseas knew I’d been spending a lot of time in Da Nang and wrote to say how blown away they were by the beauty of the city as displayed during broadcasts of the APEC meetings.

It’s all systems “go” if infrastructure and services can bear the burden of more tourists coming to Vietnam. So, where are all these visitors coming from?

We see that the People’s Republic of China is heading up the list, no surprise since it’s the world’s most populous country and northern neighbour to Vietnam. Some of the statistics are mind-boggling:

1. China’s population is 1.4 billion of which only 5 percent have passports, so that comes to 70 million that are eligible for international travel.

3. Authorities are issuing new passports at a rate of about 10 million per year.

4. At that pace China will have 100 million eligible international travellers by 2020.

5. If those eligible continue to travel at the same rate as in 2017 Chinese travellers will make 185 million trips abroad in 2020.

6. Chinese travellers spend 20 percent of worldwide overseas travel expenditures. That’s right, out of every $5 spent on travel in the world, Chinese spend $1.

China and South Korea are the source of about half the tourists that come to Vietnam.

Should they continue to arrive at the same pace during the next two years, China and South Korea would represent two-thirds of all arrivals to Vietnam by the end of 2019.  Of course this is great news all around – or is it? Yes it is great, but there are challenges on the horizon – and some already present and being worked on.

Because of the sheer volume of visitors from those two countries some destinations, particularly Nha Trang and Da Nang are gaining reputations as destinations targeted mostly at Chinese and South Korean package tourists.

Market pressure keeps prices down plus tourists from other sources are less likely to visit destinations perceived as being overrun by one nationality or another.

Next issue is Chinese tour guides operating illegally in Vietnam have been arrested, which is a sensitive topic with 4 million visitors involved and laws that are hard to enforce in some situations.

For example, if one member of a group is leading a tour and says they are volunteering because they speak English or Vietnamese, who can state otherwise?

Some of the illegal Chinese guides distort Vietnamese history implying that China still exercises some control over Vietnam. The current dispute in the East Vietnam Sea involving the notorious “9 dash line” is one of many examples.

So Vietnamese authorities are left to manage a difficult situation so that only qualified professional local Vietnamese guides are used on Chinese and other tours.

There is also a scam involving Chinese tourists called “Zero Dong Tours” which involve heavily discounted or free trips over land or by airplane to destinations such as Ha Long Bay, Da Nang, and Nha Trang.

Then the customers are duped into shopping, dining, and lodging at establishments owned by those Chinese tour operators or companies with which they have a commission deal thus facilitating a tidy profit. Often customers are coerced into buying at heavily inflated prices making the profits that much greater.

Payments are often made and transferred back to China electronically using online applications so the result is little or no profit goes into Vietnamese hands.

The tourists end up with a sub-standard travel experience, legitimate Vietnamese businesses lose profit to the Chinese companies, and these illegal tours tarnish the image of Vietnam as a destination.

This is also a tricky situation for Vietnamese authorities to manage because some of the transactions are perfectly legal, while others avoid taxes and are thus against Vietnamese laws.

It’s well-known that Chinese tourists are often not the most polite guests. Some are considered so ill-behaved that the city of Da Nang distributed 5,000 copies of a Chinese-language etiquette book for Chinese visitors including appropriate dress, littering, and respect of sacred venues.

Fair enough, the Chinese are new to the travel scene and need time to get up to speed on how to behave while abroad and it doesn’t happen overnight.

Environmental issues are starting to cause concern leading to discussion on potentially limiting the number of tourists visiting the most cherished World Heritage Sites in the future.

Ha Long Bay, the Sa Pa region of northern Lao Cai Province, and historic Hoi An each welcome millions of visitors annually, so should a limit on visitors be considered?

Visa availability is another tricky subject that has a direct impact on tourism especially in Southeast Asia, where competition among destinations is especially tough.

Chinese citizens need a visa to enter Vietnam, but that appears not to be an impediment given the huge increase in arrivals. In 2015 Indonesia waived visas for 45 countries including China, resulting partly in the robust increases in arrivals we now see.

We have no way of knowing how many Chinese tourists would visit Vietnam if no visa was required.

Vietnam offers temporary visa-free entry to citizens of 22 countries, including nine ASEAN member countries (ranging from 14 to 30 days per entry), South Korea, Japan, Russia (15 days each), and 10 European countries (also limited at 15 days). Some of the visa-free arrangements will expire in mid-2018 and others at the end of 2019, so difficult decisions will need to be made.

Vietnam introduced a trial electronic visa system for citizens of 46 countries early in 2017 which processes 30 day tourist visas for US$25. This program could be expanded to include more countries and the online processing streamlined.

The visa situation is difficult to manage because on one hand it makes good sense to control who enters Vietnam up front as opposed to tracking down unscrupulous visitors who work illegally or are involved in criminal activities after they’ve entered.

Finally, airport commercial airline capacity is an issue shared by virtually every growing economy the world over, and Vietnam is faced with tough decisions and large infrastructural investments.

The two largest airports in the country, Noi Bai International Airport in Hanoi and Tan Son Nhat in Ho Chi Minh City, each have expansions underway and more projects approved for the coming years.

To reduce the pressure of increased traffic on those two airports many new destinations continue to be added to the other nine international airports in Vietnam as well as expansion of facilities.

While there are many issues being addressed the huge upward trend in arrivals these past two years means there is a continued opportunity going forward.

Who knows? Maybe one day we’ll see Vietnam right at the top of the list of ASEAN tourist arrivals. In the meantime these are nice problems to have…..