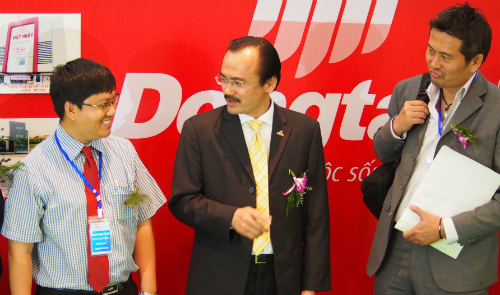 He was elected as the new chairman of the board of directors of the unlisted Kien Long Commercial Joint Stock Bank at the latest annual shareholders’ meeting of the bank on Thursday last week.

The remaining members of the board of directors of the bank are Tran Phat Minh, Mai Huu Tin, Bui Thanh Hai and Pham Tran Duy Huyen.

He told Tuoi Tre that his new role will not affect the operation at Dong Tam Group, of which Thang is still chairman after he resigned as general director [on the same day he was elected as chairman of the bank], as well as his role as VPF chairman.

Thang used to be a National Assembly deputy from Long An Province.

Its pre-tax profit stood at VND461 billion and dividend payment was 9 percent per share.

Regarding Dong Tam Group, it is reported that the firm suffered a VND191 billion loss by the end of 2011. The 2012 audited financial statement has yet been released.

Vo Quoc Thang and his wife hold nearly 54.6 percent stake in Dong Tam Group, the affiliates of which are operating in many segments including cement-tile making, industrial park development and real estate.