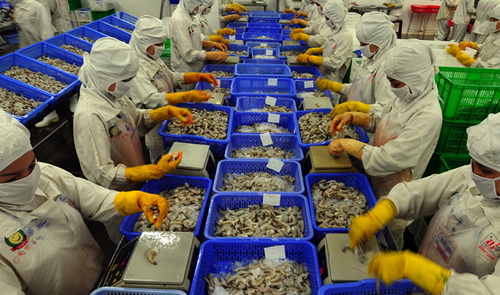 The Vietnam Association of Seafood Exporters and Processors (VASEP) has voiced its protest against the latest decision on the imposition of anti-subsidy duties on Vietnamese shrimp exporters from the US Department of Commerce (DOC).

VASEP said such a decision is unfair to local shrimp processors and exporters as they are operating under market mechanisms, and have never received any government’s subsidy or any other kinds of subsidies.

This decision also means that the US has levied two kinds of taxes on the same product, the import tariff and the anti-subsidy duty, thereby directly affecting the livelihoods of 600,000 Vietnamese farmers and many others working in related fields, including workers and businesses.

VASEP also pointed out the disadvantage of the US consumer after the new decision.

They will have to pay higher prices for the same imported shrimp products. Shrimp imports account for over 90 percent of the total supply of shrimp to the US market.

As a result, VASEP proposed the US International Trade Commission (ITC) to reconsider the DOC’s decision. While the DOC sets duty rates, the ITC is the agency which will determine if the imports have harmed domestic producers in the findings which is planned to be issued next Monday.

DOC finally decided to impose the tax anti-subsidy to many Vietnamese producers and exporters on Tuesday. In particular, the tax rates fall on two mandatory respondents, Minh Qui Seafood Co and Nha Trang Seafood Co, are 7.88 percent and 1.15 percent, respectively, while that for other companies is 4.52 percent.

The new decision from DOC also affects shrimp exporters from other six countries, including Malaysia, China, Ecuador, and India.

With the new decision, imports of shrimp from Malaysia will be subject to the highest rate, which is as high as 54.5 percent, while lower penalties were set for similar goods from China, Ecuador, India and Vietnam, according to Bloomberg.

The department set anti-subsidy tariffs on imports of Chinese shrimp at 18.16 percent. The rates on the goods from Ecuador are as high as 13.51 percent, 11.14 percent for those from India, Bloomberg reported.

But DOC determined that shrimp imports from Indonesia and Thailand didn’t receive government support that warranted a tariff to offset the benefit, said Bloomberg.

The DOC’s decision came after the Coalition of Gulf Shrimp Industries, a group of US domestic producers, asked the agency to launch investigation into the case in December last year.