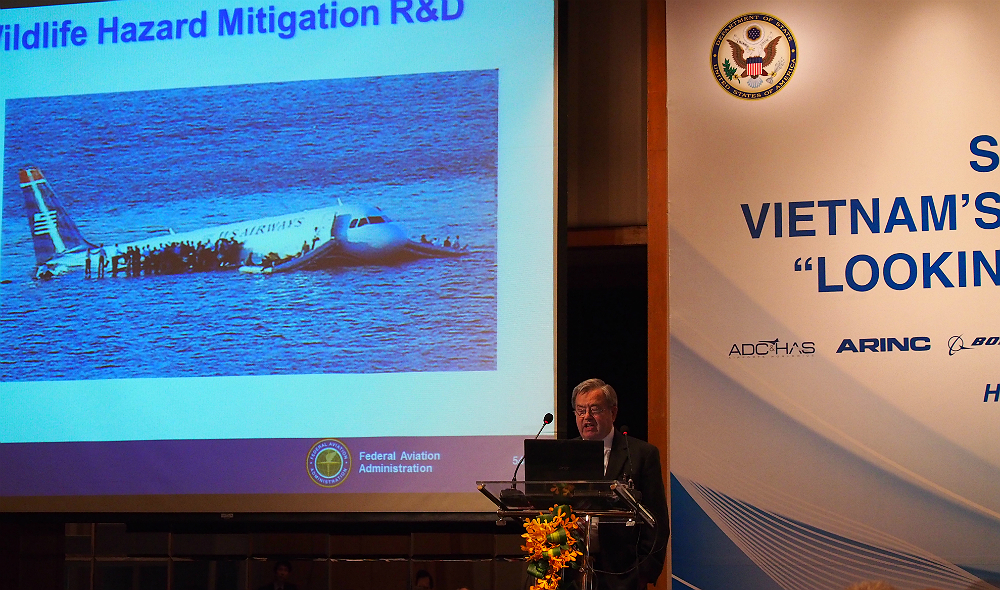 There are more rooms to boost bilateral cooperation in the field of aviation, especially aviation safety, according to a recent workshop held by the US US Consulate General in Ho Chi Minh City.

The event, with supports from the Civil Aviation Administration of Vietnam (CAAV), Vietnam, the Aviation Corp of Vietnam (ACV), and Vietnam Airlines (VNA), is the fourth in a series of conferences of the US Viet Nam Aviation Cooperation Working Group (ACWG) within the last 2 years.

US government experts from the Federal Aviation Administration also shared their expertise on how to implement state-of-the art airport safety programs using the most advanced technologies and techniques.

During the workshop, representative from Boeing Co discussed present and future trends in air traffic management, while those from Maryland-based Aeronautical Radio Inc (ARINC) and the Massachusetts-based MITRE Corp talked about best practices for airport operations and airport site selection respectively.

“The goal of the ACWG is to apply American expertise, technology and best practices to support and enhance growth in Viet Nam's civil aviation sector,” said the US Consulate.

"Many large US companies are eager to share their expertise to support the development of Vietnam’s aviation industry," said Rena Bitter, the US Consul General in HCMC.

“The US government is playing a very important role in creating favorable conditions for cooperation between the private and public sectors.”

"The two governments are having a growing and dynamic partnership in the aviation industry. It is a partnership that already enjoys a bilateral air transport agreement,” she added.

According to Ms. Rena Bitter, US Federal Aviation Administration (FAA) has continued to operate in Vietnam on its International Aviation safety assessment programs.

Another US state agency, The US Trade and Development Agency (USTDA) has funded more than $1 million to CAAV to support its safety efforts.

In fact, the USTDA’s total grants to help various sectors in Vietnam has surpassed over $20 million for various projects across the country, including several projects in the field of aviation, such as project planning of Da Nang  and Chu Lai in the central region of Vietnam.

Mr. Luu Thanh Binh, Deputy Director of CAAV, said a priority of the government of Vietnam is to develop infrastructures, including aviation infrastructure.

Currently, there are 21 airports across the country, including 8 international airports, with a total annual capacity of approximately 54 million passengers.

According to Binh, in recent years, local aviation industry achieved an average annual growth rate in passengers and goods at local airports was around 15 percent and 12 percent, respectively.

In 2012, local airports received 37.5 million passengers and 650 thousand tons of cargos, including passengers through 2 biggest international airports of Tan Son Nhat in HCMC and Noi Bai in Hanoi.

At this conference, CAAV announced various preferential policies for international carrier to offer flights to these destinations to other international airports of Phu Bai, Cam Ranh, Lien Khuong, Can Tho, and Phu Quoc .

James White, representatives of FAA, said the agency is ready help the local operators to chase birds at their airports.

According to Mr. James, US aviation is one of the “victims” of birds. In 2011, there were 2,000 cases relating to collisions between birds and aircraft, especially geese - with an annual increase of by 17 percent in 2012, as they mainly lived around the airports.

“There are even cases in which geese got into the engines of the airplane, forcing it to land in the sea," Mr James said.

American Airlines has also spent a lot of money to help its aircraft avoid birds. Specifically, US airlines spent $ 2.5 million per year to study living habits of birds near the airport. So far, the US has a database of more than 100,000 habits of birds.

In addition, US aviation cooperation with biologists and zoologists to find out habits and learn how to prevent birds.

Binh of CAAV said the birds are one of the problems having threatened Vietnam’s aircraft recently, and CAAV is also looking more ways, including international supports, to restrict birds to live around the local airports.