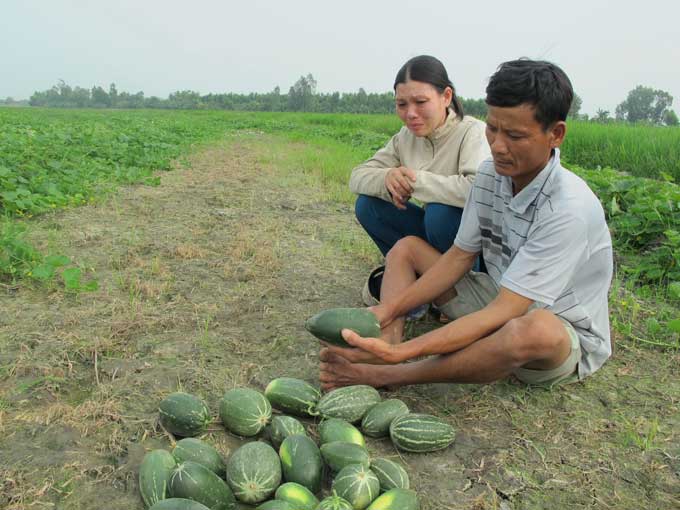 When Vo Van Son brought his newly harvested honeydew melons to sell to traders, he was vehemently rejected because the fruit looks nothing like any species of melon.

Son, based in the Mekong Delta province of Tien Giang, borrowed more than VND100 million (US$4,717) from bank loans to invest in a 2.1 hectare field of honeydew melons, hoping to have money to celebrate Tet.

The melons developed normally until harvest time, when Son and his wife began to notice that the melons did not look normal.

While the color of a normal honeydew melon ranges from green to yellow, Son’s fruits are black and some are only the length of a cucumber or an avocado, the poor farmer told Tuoi Tre.

Unable to identify what kind of melon these fruits are, all local traders refused to buy Son’s products.

“The crop is leaving us empty-handed, and what’s worse is that we have no money to pay for the loans,” he cried.

The angry farmer brought the strange fruits to the store that sold him the seeds to complain, but the seed supplier denied responsibility.

Huynh Thi Nga, owner of the Co Ba dealer, confirmed that she had sold 46 bags of the seeds to Son.

But Nga said even she “did not know what the melons grown from the seeds would look like when harvested.”

The seed producer, Trang Nong Co, has sent its employees to Son’s crop for inspection. However, the company only compensates farmers when seeds fail to yield fruit, according to its sales manager Nguyen Phuong Tuan.

Many local farmers have used the same kind of seed and none of them have complained, he said.

“The best we could do is to assist Son to find an outlet for his honeydew,” he added.

“This could be an exotic species imported from a foreign country, but I cannot identify it,” she told Tuoi Tre.