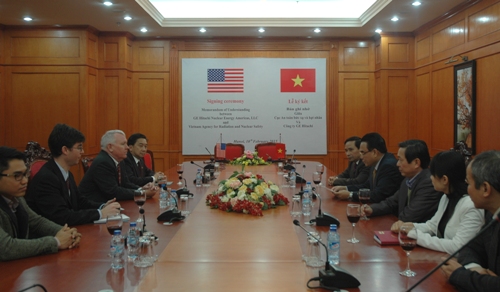 An American provider of advanced reactors and nuclear services will help the Vietnam Agency for Radiation and Nuclear Safety (VARANS) enhance its understanding of boiling water reactor technology under a Memorandum of Understanding signed Tuesday.

GE Hitachi Nuclear Energy (GEH) will promote the training and development of qualified human resources in the field of nuclear safety analysis, the Wilmington-based company said the same day on its website.

The document was signed by GEH Senior Vice President and Chief Commercial Officer David Durham and VARANS director general Vuong Huu Tan at the Ministry of Science and Technology in Hanoi.

“This agreement will enhance the capability of VARANS staff to perform technical assessments and safety evaluations,” Durham said.

“Through this agreement and others we look forward to continuing to support the building of Vietnam’s nuclear power infrastructure.”

VARANS head Tuan viewed the MoU as a major event in Vietnam-U.S. nuclear cooperation since the signing of the bilateral 123 agreement.

The 123 agreement was signed by U.S. Secretary of State John Kerry in October 2013, and approved by the U.S. Senate Committee on Foreign Relations on July 23, 2014, according to the Nuclear Energy Institute’s website.

“Since [the signing], the bilateral cooperation between the two countries in this field has generated many positive results,” Tuan said in a statement posted on the VARANS website.

The VARANS head underlined that Vietnam is building its first-ever nuclear power plant and is thus in need of cooperation and support from international partners.

This is the third agreement GEH has signed in Vietnam in recent months, according to the U.S. firm.

GEH inked MoUs last fall with the Hanoi University of Science and Technology and Electric Power University to cooperate in the field of nuclear engineering and technology. Under the documents, students from the two universities will intern this summer at GE Hitachi’s world headquarters in Wilmington, North Carolina.

Vietnam is planning to build more than 10,000 megawatts of nuclear generating capacity by 2030, according to GEH.

“As the provider of the world’s safest reactor technology designs, GEH believes it is ideally positioned to help Vietnam meet its rapidly growing energy demands,” the company said.

GEH is among the world’s leading providers of advanced reactors and nuclear services, according to the company’s website.

The nuclear alliance executes a single strategic vision to create a broader portfolio of solutions, expanding its capabilities for new reactor and service opportunities. It also offers customers around the world the technological leadership required to effectively enhance reactor performance, power output and safety.