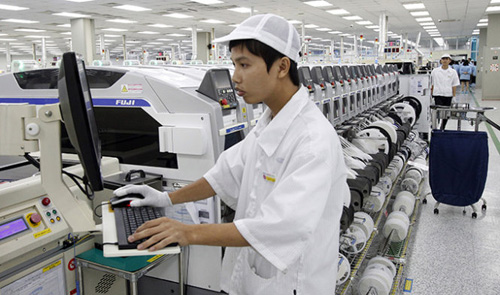 Vietnam’s electronics industry has so far this year attracted US$10 billion worth of direct foreign investment from giant global electronics firms, including Samsung, Foxconn, LG, Panasonic, and Intel, according to the Foreign Investment Agency under the Ministry of Planning and Investment.

The attractiveness of Vietnam's electronics industry can be seen at two large-scale mobile phone plants of Samsung in the northern region.

While the $2.5 billion factory in the northern province of Bac Ninh, around 30 kilometers from the capital city of Hanoi, is making feature phones, the $2 billion one in the neighboring province of Thai Nguyen is churning out smartphones, laptops, smart TVs and medical equipment.

The southern economic hub of Ho Chi Minh City is also home to a $1 billion Samsung plant which focuses on research and development and the production of high-end TV brands such as SUHD TV, Smart TV and LED TV.

The spillover created by those foreign-owned electronics factories is important, according to the Foreign Investment Agency.

After the plant in Thai Nguyen came into operation last year, foreign investors flocked to the nearby areas to set up satellite facilities worth hundreds of millions of U.S. dollars, the agency said.

By the end of last year, Vietnam had recorded the fastest growth rate in export revenue and foreign market share among ASEAN exporters, becoming the third and 12th biggest electronics exporter in the region and the world, respectively.

One year earlier, the country ranked fourth in ASEAN, after Thailand, Singapore and Malaysia.

Vietnam is expected to benefit from the relocation of many of the world’s largest electronics conglomerates to the country to take advantage of the tax incentives offered to goods made in Vietnam, following free trade agreements reached with regional and international partners, such as the ASEAN Economic Community (AEC), which will take shape next month, and the Trans-Pacific Partnership (TPP) accord.

The TPP deal, which aims to liberalize commerce in 40 percent of the world's economy, was reached following five years of negotiations between 12 countries, including Australia, Brunei, Canada, Chile, Japan, Malaysia, Mexico, New Zealand, Peru, Singapore, the U.S. and Vietnam, in a final talk in Atlanta on October 5.

Accordingly, the provisions on the rule of origin of the TPP or AEC force investors who want to leverage the opportunity to penetrate the ASEAN and TPP markets to invest in the member countries, setting up firms to manufacture parts and conduct technology transfer to achieve high localization rates for tax breaks.

However, foreign direct investment in the electronics industry in Vietnam is still facing some big challenges as the sector stops at the simple level of assembling, causing difficulties in meeting the rule of origin for both the AEC and TPP, according to government website chinhphu.vn.

In addition, domestic electronic enterprises have not contributed much to the supply chain.

Specifically, Samsung Vietnam has recently said of the 80 satellite enterprises providing components and accessories for the firm, the number of Vietnamese suppliers is under 10 percent, particularly in simple processes like printing and packaging.

Another difficulty is the level of competition in attracting direct investment from some countries in the region, as foreign investors may switch their investment destination to other countries when the incentive period offered by Vietnam ends, chinhphu.vn said.