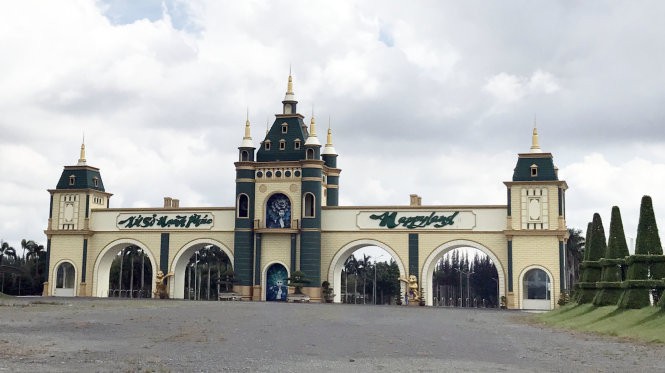 The construction of several sections at a theme park whose developer is mired in debt has been reinitiated in southern Vietnam, despite a distraint order imposed on the project several months ago.

The Happyland entertainment complex project, located in Ben Luc District, Long An Province, has continued again after a long hiatus, Phu An Investment, Construction, and Infrastructure Development JSC, under the management of Khang Thong Group, which is the developer of the theme park, said in a press release on Saturday.

The firm is set to go on with the construction of a five-star hotel, along with resort and entertainment components at the venue.

Nguyen Anh Diep, communication director of Khang Thong Group, told Tuoi Tre (Youth) newspaper that these facilities are included in the original design of the park, which had been approved by local authorities.

The primary partner for the construction is Vina Oscar Hotel group, Diep added.

Vina Oscar Hotel signed a deal with Khang Thong in July to purchase 88 percent of a 305ha area within Happyland at US$668 million.

“We will complete the payment stated in the distraint documents to focus on implementing the project,” Diep said.

The Long An People’s Committee previously confirmed that a distraint order had been given to the Happyland entertainment complex in May, with total assets estimated at VND800 billion ($35.1 million).

According to Nguyen Van Gau, head of the provincial Department of Civil Judgment Enforcement, Phu An JSC has only paid VND1 billion ($44,077) so far.

As per regulations, the firm is not allowed to change the status quo of the project under distraint, Gau said.

Officers from the department have been tasked with verifying the information regarding the resumption of construction at Happyland and checking whether the project’s status quo has been altered, the official added.

The construction of Happyland was first initiated in 2011, with Phu An Company announcing that it would be Southeast Asia’s largest entertainment complex upon completion in 2014. The original investment was estimated at $2.2 billion.

Covering a total of 350ha, the park stretches 3.7 kilometers along the Vam Co Tay River, expected to include a variety of features, namely a hot air balloon, a wine castle, Vietnamese-themed villages, studios, an ancient town, a toy city, and a five-star hotel.

However, Happyland has yet to be opened to visitors at the moment, while many facilities have not been completed.

In February 2015, the Ho Chi Minh City office of the Vietnam International Arbitration Center ruled that Phu An had to pay over $5.125 million to a Russian company.

The firm also owes more than VND674 billion ($26.6 million) to several other businesses.