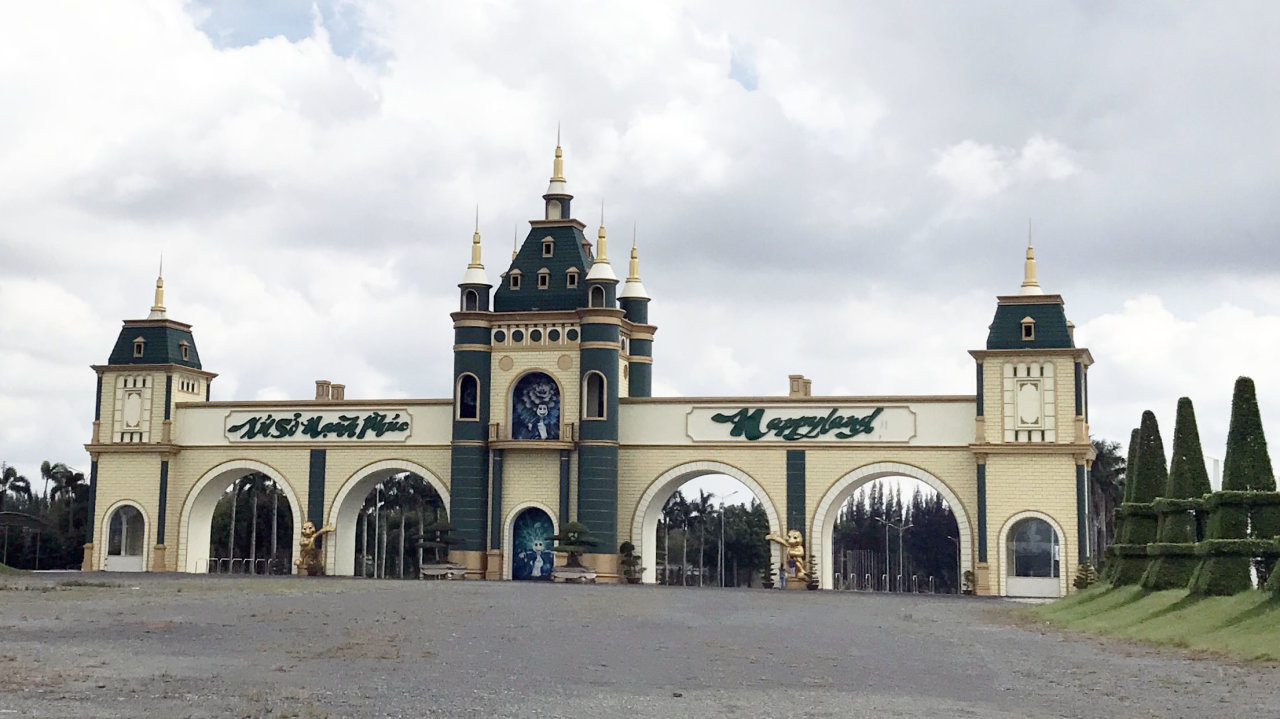 A large-scale entertainment complex in Long An Province, located in Vietnam’s Mekong Delta, may never be open to visitors as its developer is now heavily indebted.

The provincial People’s Committee recently confirmed to Tuoi Tre (Youth) newspaper that a distraint had been ordered for the Happyland entertainment complex in Thanh Duc Commune, Ben Luc District, with total assets estimated at VND800 billion (US$35.1 million).

The developer of the property is Phu An Investment, Construction, and Infrastructure Development JSC, under the management of Khang Thong Group.

The construction of Happyland was initiated in 2011, with Phu An Company announcing that it would be Southeast Asia’s largest entertainment complex upon completion in 2014. The original investment was estimated at $2.2 billion.

The park stretches 3.7 kilometers along the Vam Co Tay River, expected to include a variety of attractive features, namely a hot air balloon, a wine castle, Vietnamese-themed villages, studios, an ancient town, a toy city, and a five-star hotel.

Khang Thong had paid land lease fees for the next 50 years, trained its own staff, and even preserved a 15-hectare piece of land in the Central Highlands province of Lam Dong to grow trees that would be later planted inside the theme park.

During the groundbreaking ceremony, the developer stated that over 10 investors had joined the project, including one from Russia.

A hospitality company in Hong Kong also signed a deal to offer tours to Happyland for visitors from 10 countries, according to Khang Thong.

The ceremony was attended by Michael Jackson’s father Joe Jackson, who represented Dougherty Sims Investment Macau Corporation from the United States, which would be in charge of the five-star hotel construction.

Happyland has yet to be opened to visitors at the moment, while many facilities have not been completed.

Information from Long An authorities revealed that Phu An currently has no money in its account and is under heavy loads of debt.

In May, the provincial judgment creditor began the distraint of Happyland, which was delayed after Phu An asked for two months to sell its shares.

A similar proposal was made by the firm in early August, guaranteeing that the sale would be finished by the end of the month.

During a phone interview with Tuoi Tre on Sunday, Pham Thi Phuong Thao, chairwoman of the management board and general director of Phu An JSC, confirmed that the firm would be able to pay its debts within a few days.

Information from the Long An Department of Planning and Investment showed that Phu An has four founding shareholders, namely Thao and three of her siblings.

In February 2015, the Ho Chi Minh City office of the Vietnam International Arbitration Center ruled that Phu An had to pay over $5.125 million to a Russian company.

The firm also owes more than VND674 billion ($26.6 million) to several other businesses.