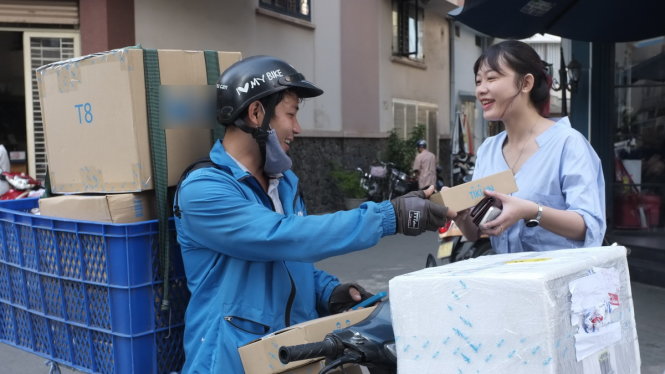 While online shopping platforms extend themselves to ensure they have adequate infrastructure to meet rising demand by Vietnamese consumers, they are still failing to satisfy when it comes to shipping, which is mostly done by third parties.

More and more Vietnamese consumers are turning to e-commerce instead of jostling with crowds during shopping events like Black Friday.

In previous years, online shopping websites became overloaded with orders, many of whom eventually failed to receive their purchased goods.

This year, such technical problems were widely resolved and most online platforms have run smoothly, especially during the Black Friday season from November 24 to 26.

However, customers have still filed complaints with e-commerce sites after their goods were delivered much later than scheduled.

In some cases, deliveries were not made until two weeks after the time of purchase.

Luu Huynh, who works for a food company in Ho Chi Minh City, bought a Wi-Fi modem on Lazada in November and was told that delivery would take five to seven days.

However, after two weeks of waiting, Huynh contacted the Lazada hotline and received an auto-reply that told him to “go to the website and check the order status.”

The problem is, Huynh said, that the order status simply stated that his purchase had been transferred to a third-party shipping service.

Alexandre Dardy, CEO of Lazada Vietnam, officially responded to Huynh’s complaint, admitting that the shipping service was poor during the promotional campaign as the system had become overwhelmed with orders.

During the November 24-26 campaign, Lazada managed to sell 1.5 million products, a threefold increase on last year, according to Dardy.

The executive did, however, admit that multiple orders placed during the Black Friday shopping spree remained undelivered two weeks after the campaign, with the shipping service to blame.

Many online shoppers have moaned that they received notifications of delayed delivery from the e-commerce websites as there were “too many orders to process.”

The overloaded systems also resulted in the delivery of goods different from what some customers had ordered, according to other complaints.

Most major online shopping websites utilize a third party to handle shipping and delivery, which ensures their service quality remains a headache.

A representative of Lotte Vietnam, which has recently joined the e-commerce market, said more than 80 percent of its orders are being delivered by the company’s partners, so “a certain proportion of deliveries are made behind schedule.”

Minh Bui, an online shopping expert, said the overloading of online retailers proves that Vietnam’s e-commerce infrastructure remains immature compared to the growth of the industry.

Thomas Harris, managing director of DHL eCommerce Vietnam, cited a company research as saying that most online shoppers in Vietnam are not satisfied by the shipping services of local retailers.

Sixty-six percent of online shoppers in Vietnam have demanded their goods be delivered by a trustworthy company, Harris added.

While e-commerce currently only makes up one percent of Vietnam’s total retail market, the online shopping industry is growing steadily in the Southeast Asian country.

David Anjoubault, general manager of Kantar Worldpanel Vietnam, says that the Vietnamese e-commerce market still has strong potential, even though its size is small when compared to others.

Online sales of fast-moving consumer goods (FMCG) reached 0.5 percent of the total market in Vietnam in the 12 months to March 2017, representing a significant lift of 69 percent in comparison to last year, Anjoubault said, citing the “Future of E-commerce in FMCG” report by Kantar Worldpanel, which they published on November 21.

“[This] makes Vietnam one of the countries with the highest e-commerce growth in the world,” he said.