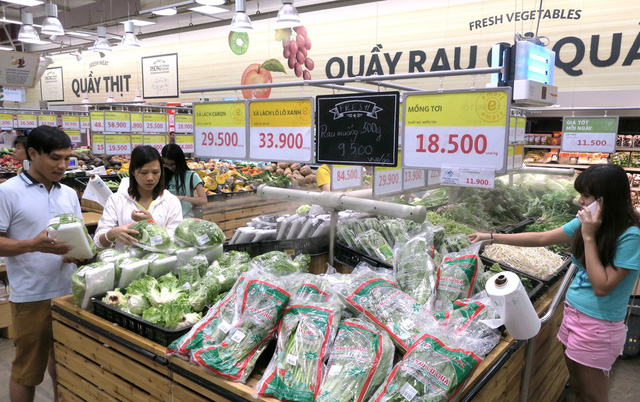 Several retailers in Vietnam are now insisting that farmers meet their own set of food safety requirements in order to become suppliers, as the country’s national standards are failing to stop unsafe and dirty food from reaching consumers.

As the ‘middlemen’ between food producers and consumers, retailers would previously call on farmers to make clean, safe food, and would accept their goods if they met national food hygiene and safety standards or had Vietnamese Good Agricultural Practices (VietGAP).

However, the national standard has loopholes that allow unsafe food to reach markets, leading to several food scares in Vietnam.

Some retailers have shifted their strategy, meaning they can no longer rely on food producers to proactively make quality food. Instead, they have raised the bar for farmers who want to become their suppliers.

This means that any food producer who wants to sell their goods in certain retail environments must meet both the national food safety standard and other specific requirements set by the retailers themselves in order for them to range their products.

Oanh now buys pigs from a farm run by food processing firm CP, which ensures that its animals are fully traceable and meet all standards.

“This will expedite the processes of transporting and slaughtering pigs and the sale of pork,” Oanh explained.

“Vendors at smaller markets will also look to produce better quality meat as they will be fined if their pork is untraceable.”

Nguyen Van Cang, a farmer in the Central Highlands city of Da Lat, has switched from growing flowers to clean vegetables, applying strict agricultural practices set by a Ho Chi Minh City-based company, who buys all of his produce.

Cang said all he has to do is follow the guidelines on growing, plant protection and harvest set by his Ho Chi Minh City partner.

“I am totally banned from using chemical fertilizer or pesticides on my crops,” the farmer said, adding that these requirements are “even higher than those of VietGAP."

Cang and Oanh are two examples of the trend of food businesses and retailers no longer relying on national safety standards or VietGAP when sourcing their produce.

They have now set their own standard, which suppliers need to meet in order to enter their ‘new’ market.

“This will ensure the reputation and quality of the businesses and retailers, which in the end will also fortify their competitiveness,” Pham Duc Binh, deputy chairman of the husbandry association of the southern province of Dong Nai, explained.

Binh said that current food safety management is so ineffective that unsafe products continue to flood the market.

“A pig may be raised under VietGAP, but its meat, having gone through the slaughtering and transporting procedure, is no longer safe once it finally reaches the consumer,” he added.

Now that consumers are increasingly aware of the importance of quality and safety in their daily meals, retailers and businesses are demanding more from the vegetables and meat they source from producers.

Bigger players in the retail sector, including supermarket chains like Co.op Mart and Big C, convenience stores like VinMart+, and shopping malls such as AEON, have also raised the bar for food suppliers, irrespective of current national standards.Like us on Facebook or follow us on Twitter to get the latest news about Vietnam!