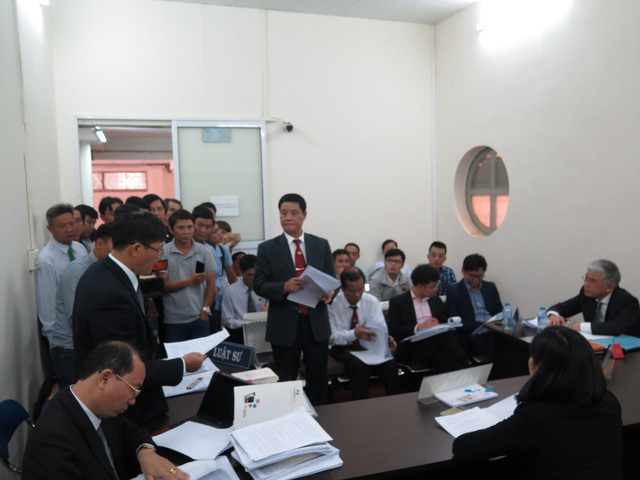 An economic court in Ho Chi Minh City assembled on Tuesday to hear a lawsuit filed by local taxi giant Vinasun Corp against GrabTaxi Vietnam in an evidence of continued clash between traditional taxi services and ride-hailing apps in the country.

Vinasun has accused Grab of multiple violations in providing taxi services, causing the taxi company profound losses, whilst Grab maintained that it had conducted its business pursuant to Vietnamese laws and was not responsible for the losses suffered by Vinasun.

Truong Dinh Quy, deputy general director of Vinasun, submitted to the court documents, photos and videos which he claimed to be evidence of Grab’s illegal practices in Vietnam.

Quy asserted that while Grab had constantly promoted itself as a technology solution provider, in reality it was operating as a transport company offering taxi services, and therefore should be answerable to the same laws and regulations as Vinasun or any other taxi company in Vietnam.

Vinasun had reported growing every year up until 2015, when Grab and Uber started to enter the Vietnamese market, Quy said, citing two independent studies conducted between January 2016 and June 2017.

Over 8,000 employees departed from Vinasun in the same period, causing hundreds of its cabs to gather dust in the company’s garages, the Vinasun executive said at Tuesday’s court.

Vinasun had to comply with 13 different business conditions required of taxi companies, while Grab was subject to only three, he pointed out.

In response to Vinasun’s accusations, a representative of Grab present at the court in Ho Chi Minh City on Tuesday said it was operating in conformity with Decision 14 issued by the Vietnamese Ministry of Transport in January 2016.

Therefore, if Vinasun had suffered from any damages following the issuance of Decision 24, it should have filed a complaint to the transport ministry rather than seek legal actions against Grab, the representative said.

“Grab is well-equipped with the experience and expertise needed to operate the ride-hailing application, and will continue to offer its service in Vietnam as long as the laws allow it to,” he stressed.

The Grab representative added that the company had adhered strictly to Vietnamese law by entering into contracts with its transport partners and collecting personal income tax on their behalf.

He refused a request to submit the contracts as evidence before the court, citing them being “business secrets.”

“If you fail to submit the contracts, on what grounds are you maintaining that Grab has been conforming to Vietnamese laws?” a Vinasun lawyer pressed, to which there was no response from the defendants.

Further questions from lawyers of the plaintiffs regarding Grab’s business operations were also left unanswered.