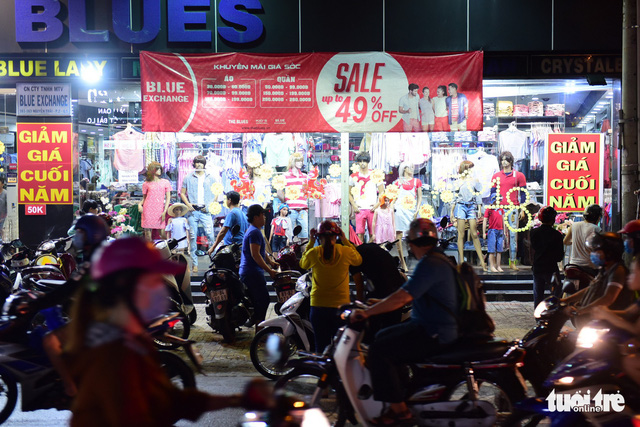 Ho Chi Minh’s first ‘fashion street’ opened on Thursday, joining the ranks of several other thoroughfares zoned for specific industries, such as books and food, as part of the southern metropolis’ bid to offer new tourism attractions.

Nguyen Trai Street in District 5, long known as a major shopping hub boasting more than 200 fashion shops specializing in everything from clothing to footwear and accessories, was officially declared the city’s first “Fashion Street” during an inauguration ceremony held on Thursday night.

The two-kilometer stretch of Nguyen Trai, from Nguyen Van Cu Street to the Tran Phu - Nguyen Duy Duong intersection, will now be officially considered as one of the city’s top attractions for fashion.

One hundred and eighty-seven businesses operating on the street, 85 percent of the total, have committed themselves to practicing honesty by ensuring product quality and selling at listed prices.

Among these, six fashion shops have been recognized as “qualified destinations for tourist services.”

The District 5 administration has said the fashion street opening is meant to boost local tourism development by drawing more international shoppers to the area.

The administration is also scheduled to launch a pilot version of an e-commerce platform, where businesses can open online stores for free, by the end of June.

The platform is expected to provide customers with a variety of convenient features and payment options for online shopping.

An area exclusively reserved for the sale of jewelry is set to open in District 5 later this month.

The city also has a ‘book street’ in District 1.