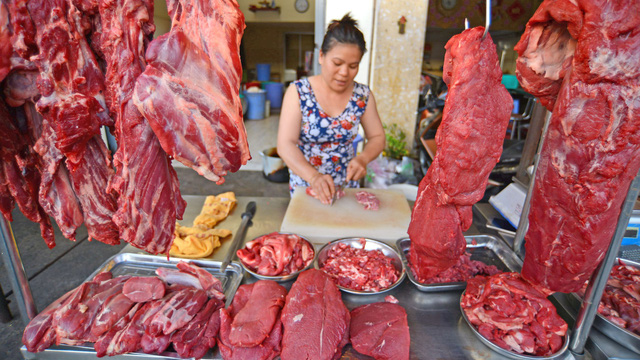 Foreign cattle flooding the Vietnamese market is putting a damper on homegrown livestock thanks to extremely competitive prices.

Farmers across Vietnam are scrambling to sell their cows as prices seem to slide past the 40 to 60 percent drop the market has seen over the past two years.

Trinh Thi Thu, a resident in Cu M’Gar District in the Central Highlands province of Dak Lak, spent VND150 million (US$6,600) buying six cows and bulls in 2016, using them to breed five additional cows over the past few years.

Dak Lak is not the only area affected by the slump.

Cattle farmers throughout the south-central, Central Highlands, and Mekong Delta regions are clamoring to find a market for their livestock without taking a hit on their investments.

“Live cows currently sell for about VND40,000 [$1.76] per kilogram, down more than 40 percent from before,” said Lam Sanh, a farmer in the Mekong Delta Province of Soc Trang, comparing the price plunge to that of live pigs.

“If prices don’t start to rise, I’ll have to sell my entire herd and switch to a new business,” Sanh told Tuoi Tre.

According to Nguyen Thi Xoan, deputy director of An Giang Province's Animal Husbandry-Veterinary Division, there are currently 77,822 cows being reared in the province, down 13,572 heads year-on-year.

“The price of [domestic] cattle has been on a downhill trend with slow consumption and low profits over the past two years,” Xoan said.

“That’s why small-scale livestock farmers are turning to other industries with higher income potential,” the leader explained.

Director of Dak Lak Province's Animal Husbandry-Veterinary Division Thuy Le Vu blamed the drop in price on farmers who were quick to jump into the market when rates were high during the 2014-2016 period.

“In addition, the large volume of cattle imported into Vietnam at low prices is hurting the consumer purchase price of beef in the country,” Vu said.

As cattle rearing in Vietnam is typically limited by a household's ability to scale their operation, famers are only able to profit from the sale of their own work, according to Tong Xuan Chinh, deputy head of the Department of Livestock Production under the Ministry of Agriculture and Rural Development.

In order to reduce costs, Chinh suggested that cattle be raised as part of a closed farming chain in areas with space to scale the operation and adequately feed growing herds.