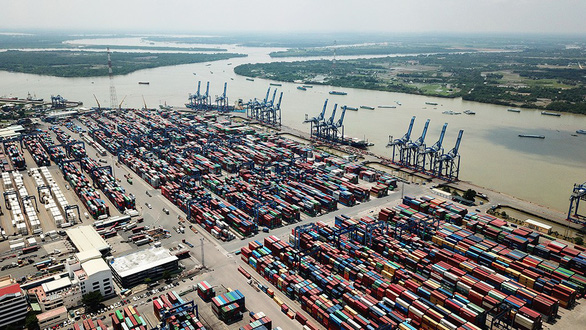 Vietnam’s economy has recorded considerable achievements in 2018, but the country’s Party chief and head of government have asked for even better and stronger performances in 2019.

Ministries, sectors and localities should “never rest on their laurels” and instead continue to exert efforts to outdo the 2018 economic performances next year, Prime Minister Nguyen Xuan Phuc remarked as he presided this year’s last government regular meeting with localities in Hanoi on Friday.

At the national teleconference, PM Phuc reiterated that this year’s economic growth rate posts a decade high of 7.08 percent, while Vietnam’s GDP topped US$245 billion and average GDP per capita rose to $2,580.

The country also saw agricultural export surpassed the $40 billion mark, the highest of all time, the premier added.

PM Phuc also shared that Vietnam enjoyed a trade surplus of over $7 billion, nearly three times the $2.7 billion recorded last year, adding this is the first time the country’s economic growth rate has doubled that of inflation.

Moreover, all 12 socio-economic targets have been fulfilled and surpassed, which is good news of the nation, he affirmed.

The first out of the four major tasks of the government in 2019, is to consolidate the macro-economy, control inflation, improve the capacity to respond to abnormal developments of the market, particularly the world economy.

“Secondly, Vietnam have to maintain the growth pace and quality through the improvement of the business and investment environment, and raising the productivity, quality, efficiency and competitiveness of the economy in combination with stepping up growth model reform and economic restructuring,” the head of state said.

Sharing the same mind with Trong, PM Phuc once again emphasized that the economic performances of 2019 have to be equal or greater than those of this year.

PM Phuc said the government will swiftly finalize and issue several resolutions following this meeting, so that the whole administrative system, enterprises and people can soon get down to business to accomplish the targets set for 2019.