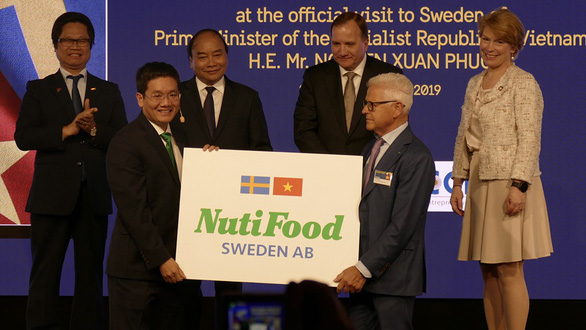 One of Vietnam’s leading dairy producers, together with two Swedish partners, put their joint venture, a milk factory in Sweden, into official operation on Monday.

The Vietnam Nutrition Food Company (NutiFood) contributed 50 percent of the investment and Swedish Backahill Company and Skånemejerier Ekonomisk Förening – a cooperative and one of Sweden's three largest producers of dairy products – covered 25 percent each, in order to set up the venture pursuant to a memorandum of understanding (MoU) inked last September.

The opening of the joint venture, NutiFood Sweden AB, took place at the Vietnam-Sweden Business Forum in Stockholm and was witnessed by Prime Minister Nguyen Xuan Phuc, who is on an official visit to Sweden at the invitation of Prime Minister Stefan Lofven.

NutiFood Sweden AB is intended to bring Vietnamese dairy and organic nutrition products closer to European and other international markets.

In its first phase of nearly US$20 million in investment, NutiFood Sweden AB is expected to produce 15,000 metric tons per year, including 5,000 tons of baby formula and 10,000 tons of powdered milk for children.

In addition, some new products from NutiFood Sweden AB are set for launch in Vietnam’s market in the third quarter of this year.

The VCCI executive hoped that there will be more cooperation between the two countries’ enterprises, like this joint venture, in the future.

Backahill is a corporation owned by billionaire Eric Paulson specializing in ownership, management and development of real estate projects in Sweden.

Skånemejerier Ekonomisk Förening is a Swedish cooperative and one of Sweden's three largest dairies including 350 producers, which provide more than 400,000 tons of milk annually.