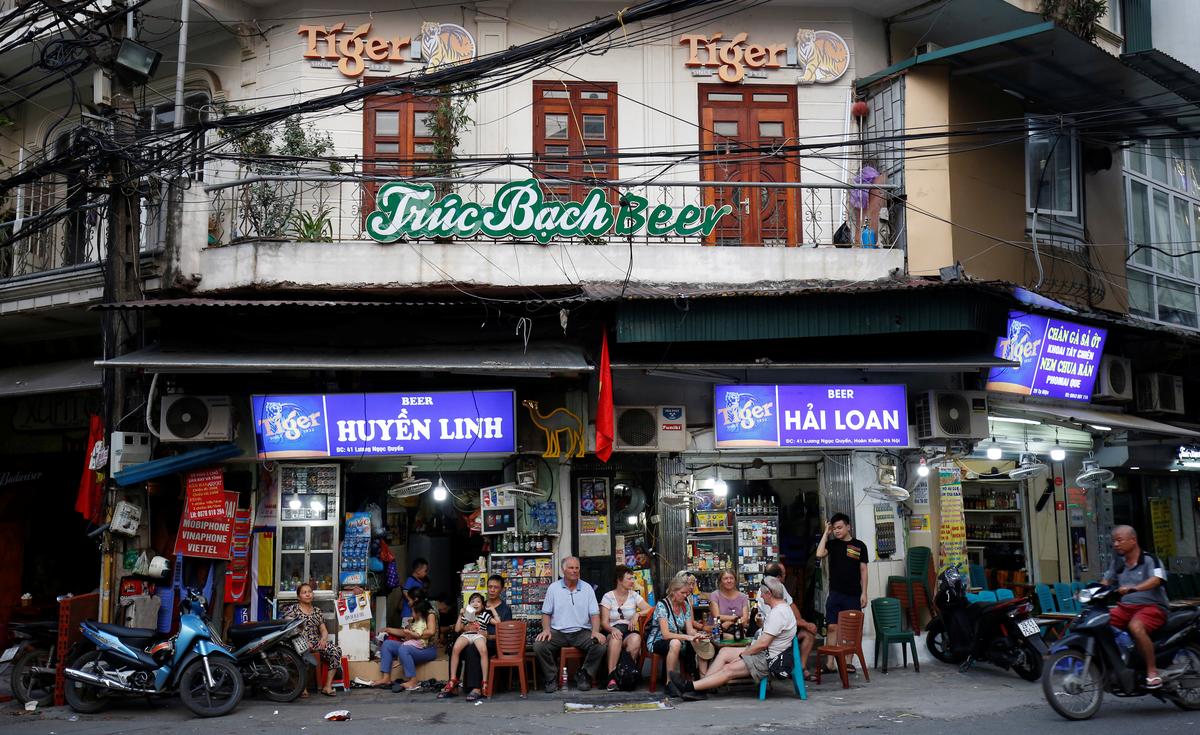 In Vietnam beer war, Heineken and Sabeco seek to take each other's turf

In Vietnam, one of the world's largest and fastest-growing beer markets, new battle lines are being drawn as Heineken NV and local industry leader Sabeco hone their product offerings and build up marketing muscle.

The Dutch brewer in March launched a new version of its Heineken lager and is expanding its reach into suburban and rural areas with its mid-tier Tiger brand and lower-priced Larue and Bivina beers.

The push outside its stronghold of cities in the south has been driven by a doubling of Heineken's Vietnam sales force over the past three years and takes aim at territory commanded by Sabeco, a former state-owned brewer now controlled by Thai Beverage Pcl.

"We aim for the No. 1 position, not only in profit but also in volume," Heineken Vietnam managing director Leo Evers told Reuters in an interview.

Heineken, Vietnam's No. 2 brewer, declined to provide sales team numbers but said it had about 3,500 workers in the country.

Vietnam, Asia's third-largest beer consumer after China and Japan, has seen beer volumes climb by an average 6.6% for the last six years compared to an increase of just 0.2% for consumption globally, according to market research firm Euromonitor International. That growth plus its population of nearly 100 million and beer's 95% share of alcohol consumption make it an alluring market for brewers.

Heineken's Vietnam sales have jumped by double-digit percentages in the past four years and the country is its second-largest source of profit after Mexico. Analysts estimate Vietnam accounted for just over 10% of the 3.87 billion euros ($4.3 billion) Heineken made in operating income before one-off items last year.

Growth has been mainly driven by Tiger, a popular Asian lager it acquired when it took full ownership of Asia Pacific Breweries in 2012. Heineken's overall market share has since risen to 31% from 20% in 2013, at the expense of smaller brewers in the country, according to data analytics firm GlobalData.

Also seeking to shore up sales at the higher-end of the market, the Dutch brewer has launched Heineken Silver, the first country-specific variant of its namesake beer since Heineken Light was introduced in the United States in 2006.

Designed for local palates, the new beer is less bitter and has 4% alcohol content compared to 5% for standard Heineken. It is priced around 5% more than the standard version and both are sold at a premium of about 40% or more over low-end beers. The company said it was too soon to say whether it might market Heineken Silver outside Vietnam.

Sabeco is in turn keen to forge into the mid-tier segment dominated by Tiger - a strategy it hopes will help lift its market share towards a goal of 50% from 40% now. But the brewer acknowledges it has work to do in differentiating its beers better.

Its brands, which include Saigon Lager, Saigon Export and 333 Export, are "all over the place", Neo Gim Siong Bennett told Reuters. One of three former Heineken executives brought in by ThaiBev, he became Sabeco's general director in August.

Since ThaiBev took control, the Saigon beer brand has become a shirt sponsor for English premier league soccer side Leicester City and the brewer has sought to ally itself to Vietnam's national soccer team, holding public screenings of matches including its final victory in the Southeast Asian championship.

It also organised a "Pride of Vietnam" gala with soccer and pop stars and held its largest ever promotion, an "under-the-cap" competition that gave away eight Mercedes cars.

By comparison, Heineken is a sponsor of the Champions League, Europe's premier soccer club competition and of Formula One, which will hold a Grand Prix in Vietnam for the first time next year.

Sabeco's main challenger to Tiger is Saigon Special, selling at about 30% more than its other products and rebranded in a green bottle. Sabeco parent ThaiBev used a similar strategy with its Chang beer in 2014, boosting the beer's market share in Thailand from below 30% to above 40% in two years.

"It's our flagship product," Neo said of Saigon Special. "We have to be close to the number one, Tiger, or exceed it."

While noting that taking on Heineken will not be easy, Neo said the company is becoming a more professional and efficient competitor.

But for the time being, at many restaurants in Hanoi, it is Tiger that has a clear foothold.

Nguyen Van Thanh, owner of the Loi Beo restaurant in Hanoi's Old Quarter, said Saigon Special sales rose during the "under-the-cap" promotion but had faded since. It now accounts for some 5% of his sales, compared to 50% for Tiger.

"Sabeco doesn't send their marketing staff to the restaurant to support sales like other brands," he said.

Sabeco said in an e-mailed statement that it has been carrying out programmes to support customer sales and improving its product quality.