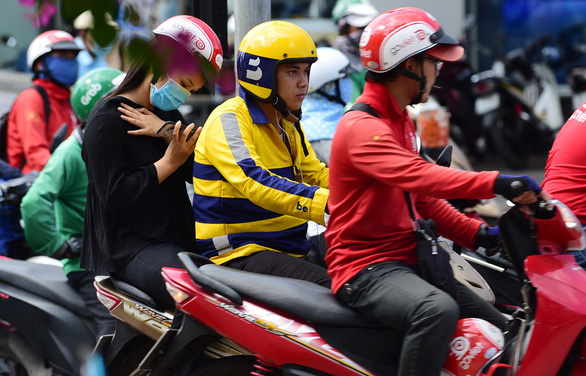 The Ho Chi Minh City tax department has issued a document elaborating on how drivers for ride-hailing services will have their revenue taxed, in the wake of a strike by Grab drivers who protested a company policy that charged them daily for tax obligations.

Ride-hail drivers are considered by tax authorities as individual business-makers and not employees of those ride-hailing companies, and are thus subject to a special tax policy, according to the document.

Specifically, ‘tech-based’ drivers who earn from VND100 million (US$4,300) annually must pay 4.5 percent of their revenue in taxes, which include a three-percent value-added tax (VAT) and a 1.5-percent personal income tax, the document reads.

Since their income is considered business revenue rather than salary, ride-hail drivers will not enjoy tax reduction based on family dependents, which is pegged at VND3.6 million ($155) per month for each qualified dependent, for their personal income tax.

They are taxed on their gross revenue, which does not account for such costs as fuel and vehicle maintenance, the municipal taxman said.

Companies that partner with these drivers to offer ride-hailing services, such as Grab, Go-Viet and Be Group, are required to declare and pay taxes on behalf of the drivers, it added.

Such guidelines from the Ho Chi Minh City taxman may leave drivers in shock, as life would be easier for them if they were considered employees of ride-hailing firms and only have to pay personal income taxes, with deductions for dependent family members and other expenses.

The instructions came shortly after ride-hailing firm Grab faced a backlash last month for introducing a scheme where it would collect a fixed sum of VND60,000 ($2.60) daily from drivers, whom it estimated to have an annual income of VND100 million or higher, to fulfill its tax obligations on behalf of the drivers.

The scheme was introduced on August 26 and partially retracted a day later following a strike staged by its drivers, who claimed they did not meet the annual revenue threshold requirement to be subject to the taxes.

Do Quang Cam, a GrabBike driver, said he was surprised when Grab announced it would begin deducting VND60,000 on a daily basis from his in-app wallet balance starting August 26 because he “has the potential of making VND100 million” in 2019.

“In principle, each citizen is responsible for declaring and paying their own taxes, so Grab can only collect and pay taxes on our behalf if we explicitly authorize it to do so,” Cam said.

Grab said in a statement on August 27 that it would no longer collect taxes from those who have not reached the VND100 million annual revenue mark at the time of collection.

“[We] will also refund any amount already collected to the e-wallets of these partner drivers,” Grab said in the statement.

It stressed that the scheme was not aimed at raising the costs of using the Grab app for drivers.

There are more than 420,000 drivers partnering with four major ride-hailing firms in Vietnam – Grab, Go-Viet, Be and MyGo – according to statistics cited by newspaper Lao Dong (Labor) in an September 4 article.