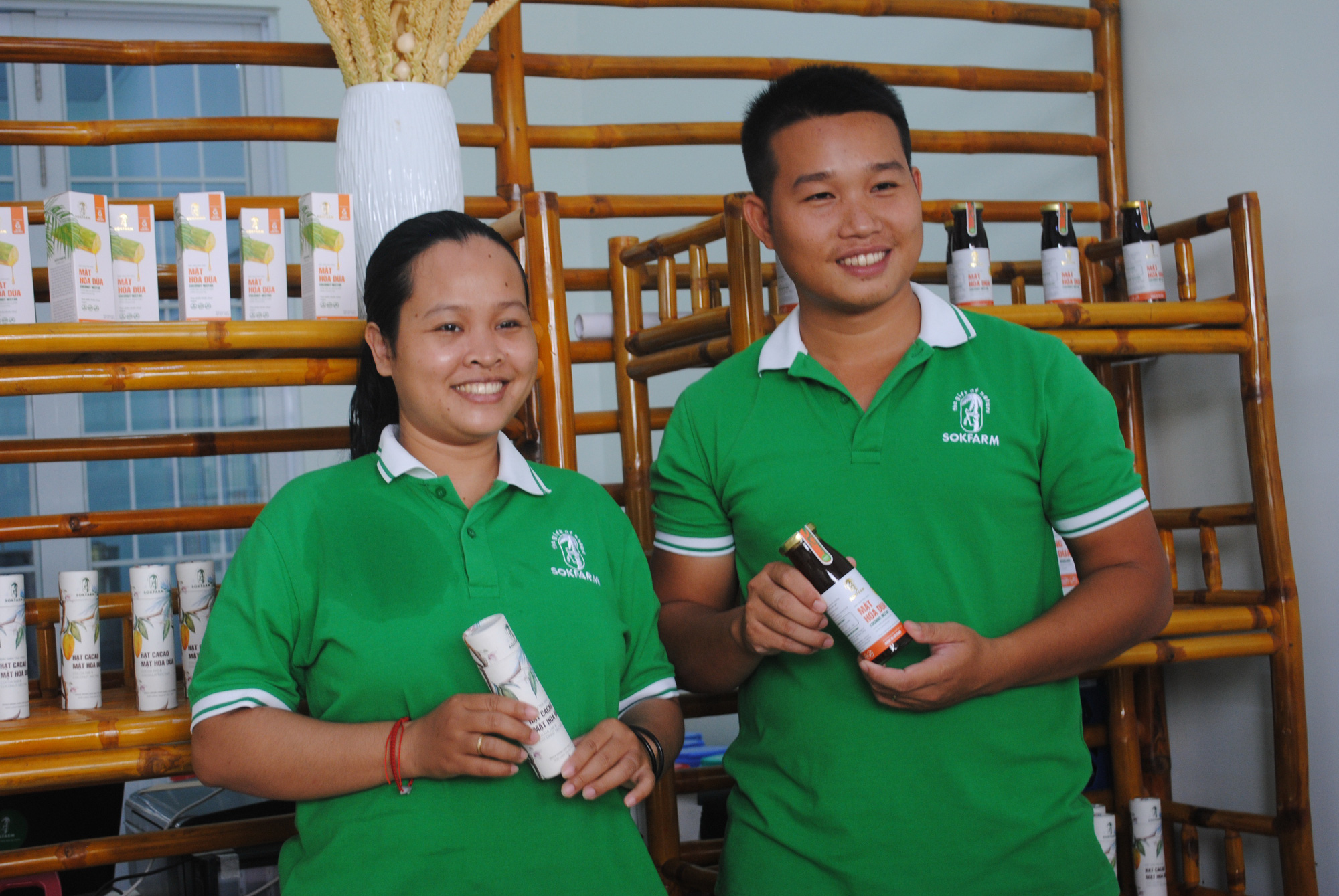 With her academic background in food processing technology, Nguyen Thi Chal Thi talked her husband into setting up their own coconut syrup business in the Mekong Delta, leaving behind their stable jobs in Ho Chi Minh City. Their years of research and practice has produced a fine product that has helped to revitalize a local community of coconut planters.

The farm is based in Tieu Can District, Tra Vinh Province in the Mekong Delta of Vietnam. It resembles any of the thousands of other coconut plantations around, but it differs greatly in the harvesting process.

The financial value from the novel product has opened up a new pathway for other coconut plantation owners in the area.

Thi stated that her hometown is stricken with poverty and that gave her an overwhelming urge to make a contribution.

“Will my countrymen be forever poor?” The question dogged her.

From her academic research into the farming practice of Thailand and Indonesia, she learned of another product that can be produced from the coconut tree — its flower syrup.

She and her husband left their stable life in Ho Chi Minh City and came back home for a daring business move.

It took them half a year to extract the first half liter of raw sap, but condensing it into commercial coconut nectar flower syrup was another uphill struggle.

Gossiping neighbors were also a blow to her motivation. Outsiders doubted her efforts, whispering to one another that she was unnecessarily messing with the crops with her meaningless idea.

To them, extracting the sap from coconut flowers sounded like a pie in the sky idea.

However, these comments could not wear down their will, even when coupled with their continued failed attempts to make the specialty product.

According to Thi, it takes special care for the flowers to produce sap, including regular watering for the maintenance of humidity, the use of organic fertilizers, and especially proper manual massage on the flowers themselves.

Sap ‘milkers’ have to use a wooden stick and tap with the right amount of force around the flower's ‘sap vein’ to get them to produce.

“Only a fine worker knows how to do it best. Too hard and it gets smashed, too softly and there’s no sap at all,” Thi said.

“An old hand at the job can extract more sap than a newbie.”

The amount of syrup also depends on the age of the flowers; very young flowers produce a muddy liquid, while very old ones hardly have any sap.

All types of coconuts can produce syrup. Each flower can be ‘milked’ for 20-30 days, averaging about one liter every 24 hours.

“Currently we are planting the Mawa coconut trees. These are the most prolific breed, producing around 2.5-5 liters of sap a day,” Thi added.

The approval and communal benefit

In September 2019, after years of quality control and processing, their finalized product went on the market.

Feedback from friends and colleagues was highly positive. The Sokfarm coconut sap started to appear on social networks via friendly recommendations.

Coconut syrup (35) has a much lower rating on the Glycemic Index compared with regular sugar (65-70), and is entirely vegan. These reasons might explain why it soon gained popularity.

Now he earns around VND3 million ($129) a month. He has also been hired by Sokfarm to collect flower syrup from other plantations.

Seeing her success, other farmers have contacted Sokfarm for partnerships.

“There are times when a thousand coconuts sell for only a few million dong,” said Tran Van Phuong, a farmer with more than five hectares of coconuts. (VND1 million = $43)

“I think partnering with Thi is just the right way to go.”