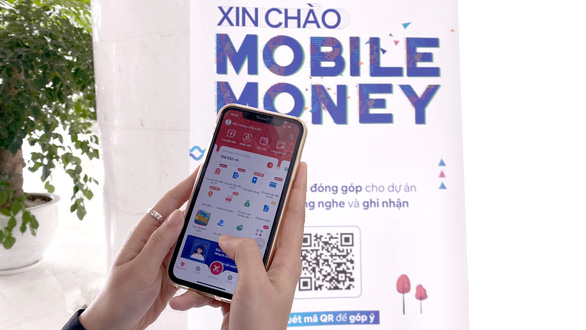 Mobile-money rush among cellular companies sets off in Vietnam

Vietnam’s telecom providers say they are accelerating plans to pilot mobile-money services and deploy them once being approved by the national government.

Earlier, Prime Minister Nguyen Xuan Phuc issued a decision approving the use of telecom accounts to do small value transactions in two years from March 9.

Nguyen Son Hai, deputy director of VNPT-Media under Vietnam Posts and Telecommunications Group (VNPT), told Tuoi Tre (Youth) newspaper that the agency was preparing documents on plans of technology, management, and procedures aligned with the decision and other existing regulations to file to the State Bank of Vietnam.

"Our infrastructure is tested and ready to operate.

"Once allowed, VNPT will provide the service for customers immediately.

"I expect it to be launched next month at the earliest.”

Meanwhile, military-run Viettel Group said they had successfully piloted mobile money with the participation of 40,000 workers and would be capable of supplying the service to all their customers when they got the permit.

With a nationwide cellular network, Viettel announced their capability of delivering mobile money to every commune.

The group expresses their high hopes to accelerate cashless payments without an e-wallet or bank account which is still the biggest barrier faced by people living in isolated areas.

Viettel’s customers can use the service to do financial transactions using smart devices or 2G mobile phones no matter whether they have a bank account or not.

“The goal is feasible as we have offered it in six of our ten markets," said the group’s representative.

"From the end of 2020, some 40,000 Viettel employees have joined in the pilot run, using telecom accounts to make payments and transact money."

The State Bank of Vietnam has just licensed MobiFone to provide payment intermediary services, opening the door for the carrier to join the game.

“We are finalizing documents to operate mobile money as soon as possible,” said a MobiFone official.

Technology infrastructure to ensure security and prevent money laundering has also been developed, according to telecom carriers.

Therefore, telecom carriers are among the very first agencies able to be licensed to run mobile-money services.

According to the decision, mobile-money accounts can do domestic transactions and payments for all legal products and services in Vietnam using the Vietnamese dong aligned with existing regulations. International payments and transactions are prohibited.

Mobile-money users can load and withdraw cash at appointed locations, from their bank accounts or e-wallets.

Mobile-money accounts of the same piloting provider can transfer money between each other.

A mobile number used to open a mobile-money account has to be activated and active for at least three consecutive months.

Any individual who registers mobile money will be asked to show the same ID card or passport used to register a mobile subscription.

The Vietnam Telecommunications Authority estimates that by 2020, the country had had some 132.5 million active mobile subscribers.

Therefore, the number of mobile-money accounts might reach dozens of millions when the service is deployed.

A push for cashless payment

Pham Tien Dung, head of the Department of Payment under the State Bank of Vietnam, underscored the significance of mobile money in accelerating cashless payment and access to financial services, especially in rural, mountainous, border areas and on islands.

There will be no ceiling limit for the amount of money loaded into an account.

Customers can top up their mobile-money accounts at appointed locations or from bank accounts and e-wallets.

“Any person having a bank account or e-wallet can transfer money to another mobile-money account," he said, adding cash can be withdrawn from mobile money at providers’ business locations.

"A mobile-money account holder can also receive money from other holders.

To prevent risks posed by the implementation of mobile money, the PM’s decision prohibits many activities that may create loopholes for law violations.

Service providers are asked to set up mechanisms to collaborate and provide information on mobile-money accounts doing abnormal transactions or showing signs of illegal activities for the Ministry of Public Security, the State Bank of Vietnam, and the Ministry of Information and Communications.

Enterprises also have to develop a mechanism to temporarily lock or freeze mobile-money accounts right after detecting signs of violations.

They are not allowed to pilot providing credit services for mobile-money users, paying interest on an account balance or any activity that can increase the value of a money-money account compared to the initial amount loaded.

Providing or using a mobile-money account to perform transactions for the purpose of money laundering, terrorism financing, fraud, and other illegal acts is outlawed.