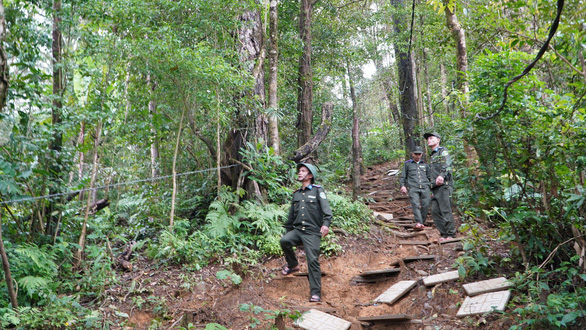 With its large forest reserves, Vietnam has great potential for developing a forest carbon credit market, and a “draft project to develop the carbon market in Vietnam” with a view to piloting a carbon credit exchange by 2025 was already submitted to the prime minister for approval, according to the Ministry of Natural Resources and Environment.

Each carbon credit represents one ton of carbon dioxide (CO2), or one ton of other greenhouse gases converted into one ton of CO2 equivalents, which will bring significant benefits to sellers including farmers, forest owners, or high-tech enterprises.

Carbon credits are viewed by experts as new resources in Vietnam, giving the country much-needed funding to improve income for forest growers and to protect and expand forest coverage.

It was expected that Vietnam would be able to sell 57 million carbon credits to international organizations annually, with each of the credits fetching as much as US$5, the Vietnam News Agency (VNA) reported.

Dr. Nguyen Ba Ngai, vice-chairman of the Vietnam Forest Owners Association, said that the carbon credit market in the world has been established for a long time, including voluntary and compulsory markets.

With a total of 628,000 hectares of forest, the province can store approximately one million tons of carbon every year, meaning one million carbon credits can be put up for sale internationally, said Le Minh Hung, director of the Quang Nam Department of Agriculture and Rural Development.

The province is expected to sell some six million carbon credits for $30 million by 2025, Hung said, adding that the province has asked for the government’s permission to be the first in the country to join the voluntary carbon market.

Quang Nam submitted a pilot project on forest carbon credit business to the prime minister, and if approved, the scheme will be piloted from this year until 2026, said Tran Ut, deputy director of the provincial Department of Agriculture and Rural Development.

To date, five foreign companies and organizations have expressed interest in purchasing forest carbon credits from the province, the first locality in the country allowed by the prime minister to set up the project, according to Ho Quang Buu, deputy chairman of the provincial administration.

Dr. Ngai said that the World Bank has recently, through a partner fund, signed agreements with Vietnam to pilot the purchase of 10.5 million tons of forest carbon credits.

In addition, a number of other international organizations are exploring the possibility of purchasing forest carbon credits from Vietnam, including several non-for-profit organizations that have piloted it in a small area in Kon Tum Province in the Central Highlands region, Ngai added.

Under the deal, Vietnam will reduce 10.3 million tons of carbon dioxide emissions from six north-central provinces until 2025 to receive up to $51.5 million, the VNA reported.

The Ministry of Agriculture and Rural Development also signed a letter of intent with the Organization for Forest Financing (Emergent), a trustee of the Lowering Emissions by Accelerating Forest Finance (LEAF) Coalition, under which Vietnam will transfer 5.15 million tons of carbon dioxide emissions reduction from forests in the south-central region and Central Highlands to LEAF/Emergent between 2022 and 2026.

The deal will bring the country another $51.5 million, the VNA said.

With an area of about 43,000 hectares of natural forest, considered having great potential for carbon credit sales, mountainous Nam Tra My District is among the locales selected by the Quang Nam administration to pilot the sales.

“Forest protection forces and locals will benefit from revenue from the sale, thereby forests will be protected better by resident communities from deforestation or other damage,” Hien said.

Deputy Prime Minister Le Van Thanh recently demanded the Ministry of Finance coordinate with the Ministry of Natural Resources and Environment and agencies concerned to draft a domestic carbon market development plan in line with the 2020 Law on Environmental Protection.

The ministry said it had submitted a “draft project to develop the carbon market in Vietnam” to the prime minister.

According to the ministry’s proposed road map, along with the completion of a legal framework, Vietnam will start piloting a carbon credit exchange by 2025, and the market will officially operate from 2028, the agency said.

The world carbon credit trading market is heating up, estimated to reach $1 billion in 2021, with prices of carbon credits varying from country to country, according to S&P Global.