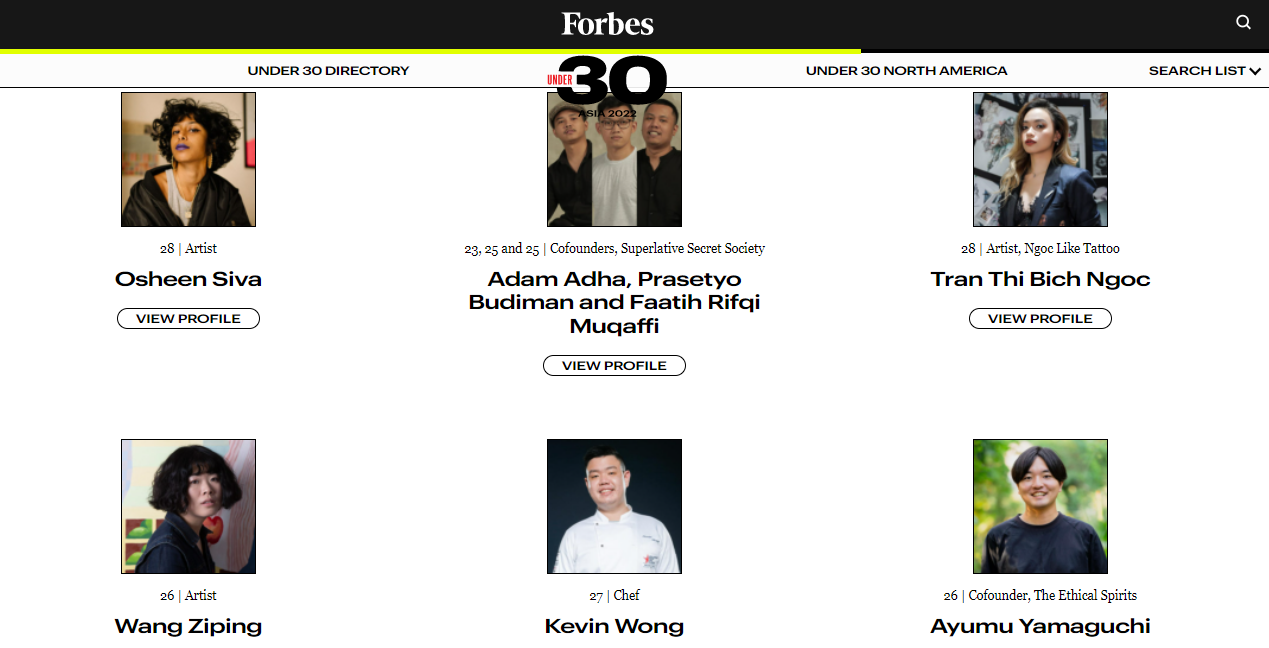 Tran Thi Bich Ngoc, 28, was named in the arts category, 29-year-old Nguyen The Vinh was listed in the finance and venture capital sector, while Le Yen Thanh, 27, Nguyen Thanh, 29, and Uyen Tran, 28, were honored in the industrial, manufacturing, and energy categories, respectively.

“Tattoo artist Ngoc has been transforming traumatic scars into works of art since 2013, when she was 19,” reads Forbes’ description of Ngoc.

“While tattooing is still considered taboo in Vietnam, she believes covering up scars with artistic tattoos can be a part of the healing process that empowers people, especially women, to start a happier chapter in their lives.”

Meanwhile, Vinh is a co-founder of blockchain-based decentralized finance company Coin98, which has raised US$16.5 million in three investment rounds.

He has won more than 100 awards nationally and internationally for his programming skills.

Meanwhile, Nguyen Thanh has been one of the youngest leaders at Vietnamese multi-sector conglomerate Vingroup after joining its transport subsidiary VinBus in 2019.

Previously, the now deputy CEO set up his own textile factory at age 18 before dropping out of college to work for various companies including KFC Vietnam, Cargill Vietnam, and Lazada Vietnam.

TômTex is a completely biobased material created from shell seafood waste or mushrooms.

Uyen holds a master’s degree from the Parson School of Design in New York.

Over 4,000 nominees applied to be on this year’s list, a record number for the Asia list, according to Forbes.

The final 300 were selected and vetted by Forbes reporters and a group of respected judges on a wide range of criteria, such as demonstration of leadership, impact, potential of success, and the embodiment of the entrepreneurial spirit synonymous with the American business magazine.

Twenty two countries and territories are represented on the list with India ranking first in terms of number of entries (61), followed by Singapore (34), Japan (33), Australia (32), Indonesia (30) and China (28).

Last year, Vietnam had three representatives in the Forbes 30 Under 30 Asia list.