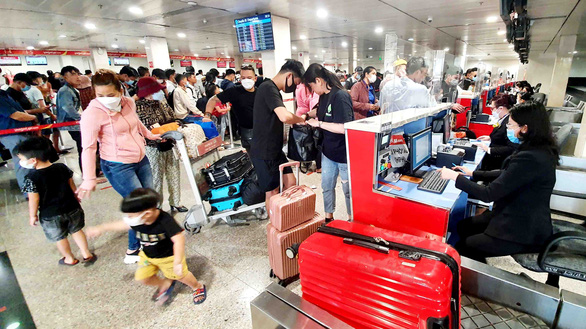 The Vietnamese Ministry of Transport has requested that airlines improve their punctuality after more than 5,600 flights were delayed in June.

Vietnamese airlines operated 30,808 flights between May 19 and June 18, a jump of 528.7 percent and 18 percent compared to the same period in 2021 and last month, respectively, according to statistics of the Civil Aviation Authority of Vietnam (CAAV).

During this period, the overall punctuality of the entire industry was 81.8 percent, with only 25,206 flights taking off on time, down 15.9 percentage points and 9.4 percentage percentage points compared to the same period last year and in May, respectively.

Airlines canceled 65 flights, or 0.2 percent of the total flight number, up 4.8 percentage points, over the same period last year, but down 0.1 percentage point month on month.

The Ministry of Transport sent a dispatch on Wednesday to request that the CAAV strengthen its monitoring of airline operations and ensure that flights are punctual and that delays and cancelations are rectified.

Vietnamese airlines carried about 21.4 million passengers, including 20.8 million domestic ones, up 62.4 percent and 57.3 percent over the same period in 2021, respectively.

Domestic travel has rebounded to the pre-pandemic level, posting 10.5-percent growth in traffic volume against the same period in 2019.

On average, over 900 domestic flights carried 150,000 passengers each day.