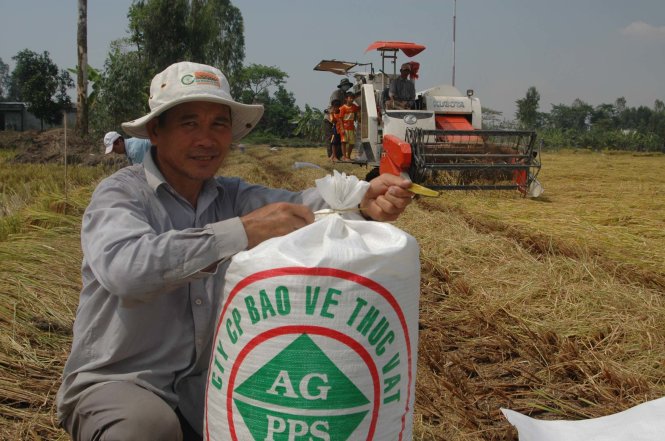 Editor's note: Doan Duong Duc Giang, 31, from Hanoi, expresses his hope that Vietnam would boast modern and safe agriculture in the next 20 years in his submission to the “Ky Vong Viet Nam 20 Nam Toi” (“My Expectations for Vietnam in 20 Years”) writing contest.

Growing up in the countryside and obtaining a university education thanks to the produce yields of my grandparents and parents, I’ve cherished my dream that Vietnam will pride itself on cutting-edge agriculture which will be highly automated and computerized in the 20 years to come.

Local farmers would no longer wade in mud to plough their fields, do small-scale farming, have low rates imposed on their yields, or export their raw produce at dirt-cheap prices.

A burning dream for modernization

My dream is that in the next 20 years, local farmers will sit in air-conditioned rooms, maneuvering with ease different kinds of agricultural machinery in their vast paddies. The machines would take over such tasks as ploughing, sowing, weeding and harvesting, with minimal manual work left for farmers to do. Farmers would travel by car from one field to another, and carry their loads of produce to wholesale markets and processing factories so as to minimize the possibility of having low rates imposed on them.

I also dream that each city and province would be home to some hundred “green agriculture zones” boasting multi-layer greenhouses.

In such zones, farmers would no longer be subject to hostile weather or left to the mercy of Mother Nature as their forefathers were. They would instead take their own initiative in adjusting irrigation, and in their use of lighting systems and fertilizers.

The safe, clean greens would then be heartily embraced by locals, who would be free from worries of consuming vegetables with chemical and pesticide residues and the associated health risks. Furthermore, local produce would be exported around the world, earning farmers substantial revenues and boosting their reinvestment for further growth.

Vietnam’s agriculture would then adopt cutting-edge technology, which would improve efficiency and reduce dependence on pesticides and chemical fertilizers. Cattle and poultry would be raised on clean bran to make fresh, delectable meat. In addition, the leading technologies employed in agriculture would allow electricity to be extracted from tree roots to operate generators.

Need for specific strategies and policies

To make such an agricultural dream achievable, the government needs a strategy to develop the current agriculture sector with detailed short-term and long-term plans.

For instance, such plans would involve calculations on how many acres of fields would be collected in five years; or how modernized agriculture would be in 10 years’ time. It’s essential that developing agriculture go hand in hand with other economic sectors, creating added value chains and forming new agricultural practices.

Secondly, the government should adopt incentive policies which would facilitate the participation of farmers and enterprises in mechanizing and computerizing agriculture. Tax reductions or exemptions should also be offered to farmers, while policies should be promulgated to ensure that small fields are gathered into large paddies which can use new technological applications.

The government should also call for contributions from foreign-owned enterprises in this modernization and encourage foreign-invested firms to boost processing of local farmers’ raw produce.

Thirdly, the government should also speed up the establishment of research and development centers, where exhaustive research would be conducted to produce hygienically-ensured staple grains and food which would meet international standards and could thrive under Vietnamese soil and climate conditions. The choice of which plants to grow and which cattle and poultry to raise needs thorough consideration.

Vietnam would also see its strategic hallmark produce such as coffee and cocoa seeds, lychees, and longans processed into fine-quality products. Seedlings and the young of flora and fauna breeds which are predicted to be popular in the global market would also be introduced in Vietnam.

In addition, the government should create auspicious conditions for enterprises, research institutes and universities to form partnerships and set up farmer training centers. University graduates and holders of master’s degrees who wish to join the modernization process would also receive training at such centers.

Fourthly, it’s urgent that local farmers and engineers be sent to countries with advanced agriculture including Israel, Australia, Japan, and West European countries to learn from them and apply what’s possible to their home country’s agriculture sector.

Lastly, favorable conditions should be created to allow easier transactions for produce exporters. These firms would have some of their employees working around the clock to receive orders from European and North American markets with vast time zone differences compared to Vietnam’s. Local produce should be mainly intended for export.