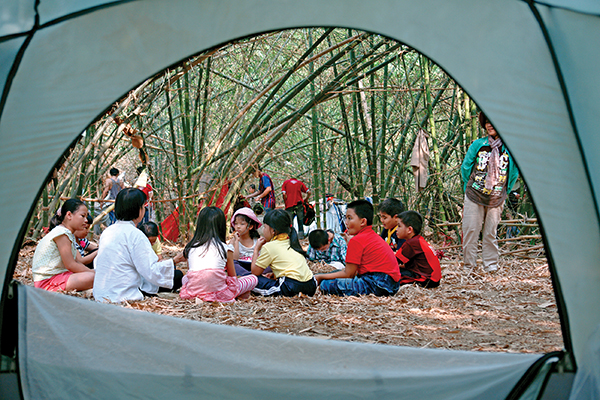 Editor's note: Le Pham Phuong Lan expressed her hopes that Vietnamese children would be allowed free self-expression in the next 20 years in her submission to the “Ky Vong Viet Nam 20 Nam Toi” (“My Expectations for Vietnam in 20 Years”) writing contest.

For the sake of Vietnamese kids in 20 years, I’ve pinned my hopes that children then would be allowed to speak, cry and laugh more than their predecessors.

This is perhaps also the hope cherished by many Vietnamese people, as kids hold the country’s future.

Is it true that today’s children are not allowed to speak, cry and laugh as much as they should be?

Vietnam was one of the first countries to join the United Nations Convention on the Rights of the Child. However, there remain dark sides to local kids’ life, and kids are constantly denied their full right to speak, cry and laugh.

As a result, precocity, indifference and emotional hardening among today’s children have gradually taken over their inherent naivety. Today’s juniors are robbed of adequate, fruitful communication with their parents and have mounting difficulty expressing their emotions. Many of them turn increasingly uncommunicative, reserved and lonely, and have lost faith in the people around them. Children do not have the chance to have their voices heard at school.

The “ban on speaking” tends to occur both at home and at school. Not a few parents prohibit their children from having a say in their family affairs, saying no to what they are told, and inquiring about sexual matters, as these are not considered to be of children’s interest.

The same applies to school life. Students are yet to be able to question what their teachers tell them or debate with their teachers on certain scientific issues democratically and forthrightly. Students remain imposed upon when it comes to listening and accepting results.

The “ban on crying and laughing” is also rife in many families. When kids have a tantrum, feel blue or sob, their parents menacingly prohibit them from crying, or they will get a good beating. Mothers also scold their daughters for talking and laughing at the same time and forbid them from doing so again as “such an act undermines the young girls’ womanly virtues.”

Juniors at different ages do have certain needs. When kids feel like speaking, they wish to express what they think and feel about a certain matter. Though kids may not express their ideas articulately, this is reflective of their demand and is an opportunity for them to hone their language skills. Denying children opportunities to speak up inadvertently hampers their linguistic and mental growth.

Youngsters’ laughter or cries are expressive of their contentment or frustration about something involving adults. Laughter, optimism and contentment are conducive to a harmonious, cozy family atmosphere and ease tension and conflicts between parents and children. Children’s crying is also their need to relieve their resentment or demand attention and love from people around them.

Four solutions to be adopted in 20 years:

1.       All kids are supposed to be equal beneficiaries. They would all be entitled to a fair education in all parts across the country. There would be enough playgrounds for kids; and children in remote, mountainous and border areas and islands would no longer be rendered underprivileged due to lack of benefits from government policies.

Youngsters would no longer be inadvertently or purposefully imposed upon by adults’ outdated thoughts which have led to infringements on children’s rights. They can work according to their health and age, learn skills and be eligible for robust physical and mental growth.

2.       Parents are psychologists who are supposed to grasp their children’s psychological twists and acquire knowledge and skills which would be popularized among parents. Kids would feel free to express what they think and feel with adults, play at their own will, and have their own childish space.

Parents should also fully understand and be sympathetic to the natural feelings among their children who are on their way to completing their own self values. Kids would be allowed to laugh out loud, sob their hearts out or express their fury without having to repress these emotions. Parents would make perfect emotional mentors who would help their kids straighten out all they get into in life. It’s highly advisable that children not feel insecure in their own homes.

3.       Young students would no longer be imposed upon, as classes would go on democratically and teachers would be friends with their students and be willing to invite debates from them for knowledge’s sake. The students then would have ample opportunity to enhance their mental, reasoning and linguistic skills as well as tap into their strengths, aptitudes, interests and potential to grow into the country’s talents.

4.       Communicative space would be increasingly auspicious, as apart from supportive families, schools and society, the local media, Internet and group relations would become essential information channels to help kids boost their independence and creativity. Children’s awareness would be raised on their own legal rights and responsibilities.

The dream society would help kids become more outspoken and be willing to express each shade of their emotional spectrum. That society would also facilitate kids’ chances to learn how to be their own masters and boost their confidence in their quest for true, worthy values.