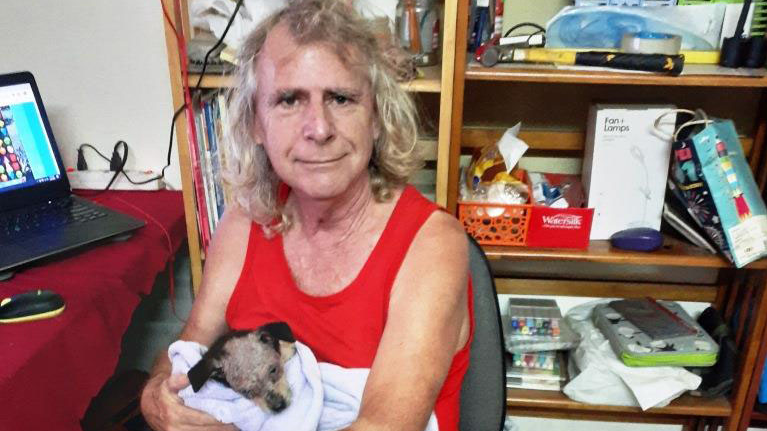 For the time being, this story has a happy ending.

As the saying goes; Life happens while you’re making other plans.  Last Tuesday night, about eight days ago, a little shadow slipped through my front gate at 10:00 pm just as I arrived home from a fairly boozy night out.

I hadn’t yet switched on the front courtyard lights when I sensed something moving near my feet. Even my big dog didn’t spot the little puppy at first.

Having lived in Vietnam for 14 years, I knew better than to jump around in surprise and I knew where the lights are in the dark. But I did get a shock when I saw the pup in the light.

Half exhausted, skinny as a rake, and sitting at my feet with baby eyes simply saying ‘help me’. I barely recognized him as a puppy for a moment as the mange covering his skin made him look more like a baby predator (like the monster from the movie) shaking in the half-darkness.

Having raised more than dozen dogs from pups to dog adults, I’ve seen more than my fair share of horrible sights so the mange didn’t frighten me that much.

Grabbing him quickly and getting him inside was the first instinct and then finding a towel to wrap him up. After some food and water, the little fella fell asleep almost instantly.

But I knew his road ahead wouldn’t be easy.

Mange is caused by tiny spider-like ticks that hide under the skin. It is very contagious between dogs and also from bedding and shared sleeping areas.

In rarer cases it can be passed from mother to pup.  Although it can be transmitted to humans, the ticks can’t complete their lifecycle in human skin.

Its relatively straight forward to treat with medicated baths, medical sprays and injections to clear up any internal infections.

Generally, it takes around 4 weeks of treatment to start to see improvements in skin and appearance. Fortunately, in Vietnam, all this is far cheaper than in western countries.

The next few days were a hurried run around for puppy food, meds and a vet to check him out and seeking help regarding his future.

I knew I couldn’t keep him as my big dog, ‘Puppa’ was already growling whenever the baby pup approached him. I’m sure my dog could smell the skin problem and didn’t want to be anywhere near him.

After looking after the tiny pup for about eight days, a good friend was able to help me find some people interested in fostering the pup.

Fostering is usually only until a good home can be found for the dog; it can be long or short term. So, there’s often the prospect that the foster parent might not be able to look after the dog — visa problems, unexpected end of job, urgent need to leave Vietnam are just a few of the problems.

The vet thought that a local either pushed the pup through my gate or abandoned the dog because they couldn’t deal with the skin problem.

If the unfortunate puppy had made his own way to my house, as unlikely as that seems, that would him one tough pup! But abandonment is very common here.

Although authorities are now becoming stricter about dogs in public areas, requiring a leash and muzzles and the collection of strays and dogs with no identification, it still hasn’t impacted much on the current situation.

While wealthier Vietnamese buy exotic dog breeds, most dogs are given away to neighbors and friends. Many of these breeds are totally unsuited to Vietnam’s harsh heat being mostly European animals for colder climates.

They look beautiful but often live uncomfortable over-heated lives in homes with no outside spaces — adding to a dog’s stress and unhappiness.

Sadly, the doggy love affair is frequently short-lived with local dog catchers (the ones with the big cages on the motos) collecting unwanted or injured dogs.

It’s a dark truth that many dogs don’t live long once they are too big, too noisy or otherwise unloved.

At the moment, pet charities and organizations are urging the local public to adopt rather than buy and to foster, which takes some of the strain and pressure off these organizations to meet the costs of looking after animals in their care.

This applies to cats and animals kept as pets. Regardless of whether you are a traveler, expat or local — there should be more thought taken before getting a pet here.

It can be the difference between a happy pet relationship and the well-being of the pet. Also, fostering is a good alternative to an uncertain commitment to having a pet forever — and an excellent way to ‘test the water’ for future pet owners. It is life or death for animals.

I saved a little puppy for today. Hopefully we can all start saving the animals that share our world for all of our shared futures.