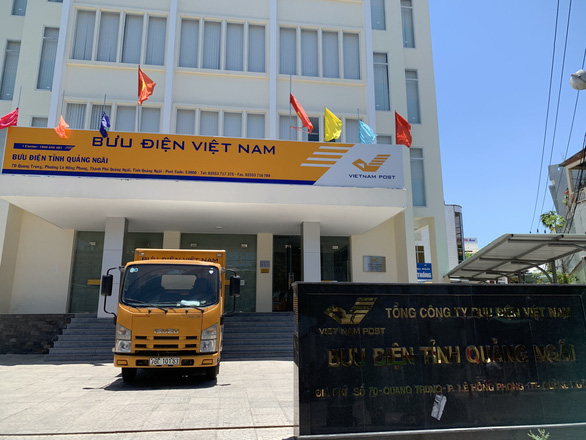 We all know the drill about stereotypical socialist countries in which everyone has a job but nothing much actually gets done, with red tape that could stretch from Thanh Hoa to Tbilisi.

Well, it’s time to shatter another myth as some of the best service in Vietnam comes from a place I’d least expect: the post office!

The other day I saw a Vietnam Post (Buu Dien Viet Nam in Vietnamese) delivery motorbike screech to a halt in front of a woman waiting on the sidewalk and the driver offered three products for her consideration. The lady rejected two items with a marked frown, selected the other, paid, and the driver disappeared down the road in a cloud of dust.

It turns out that new selection service is extremely popular, reducing personal contact in busy shops during these tumultuous times. Buu Dien Viet Nam returns the unwanted goods to the seller without any charge to the customer, so everybody is happy.

Internet shopping and delivery in Vietnam require an adjustment of mindset for foreigners because the post office’s processes are actually – brace yourself for this: designed with the customer in mind!

In “developed” countries, customer service has slowly deteriorated into a tug of war between vendor and customer whenever there is an issue, pushing the envelope back and forth until one or the other finally gives in, and that’s very often the party who’s paying the bill.

Let’s say you’re getting a home delivery, which typically takes place on weekdays during business hours, with limited service available evenings and weekends.

If you’re not at home to receive the item the first time, chances are you’re working and probably won’t be home the next business day either. So, what the hell, they deliver again, and if the second attempt is also futile, a note will be left saying the item has been returned to the post office or their warehouse.

Suddenly, the shoe is on the other foot, with you, the customer and recipient, performing the very activity you already paid someone else to do.

I have never used one of the slick global courier services, but not for lack of effort on my part. I investigated only to discover that those outfits have double-digit delivery options, as many potential surcharges, and even more service add-ons available on top of all that.

I was looking for something simple such as: “Relatively normal person mailing normal letter to or from Vietnam” but “normal” in much of this world is obsolete due to endless versions and varieties of products.

It was more like “Mail letter weighing not more than 74.5821 grams for international delivery in less than 3 days, if our airplanes fly those days and there are no lithium batteries or grandma’s brownies included, and it’s a weekday, unless it’s one of a plethora of various religious holidays, assuming the neighbours’ dog doesn’t bite, and the designated recipient is right-handed for signatory purposes.”

Needless to say, that was the end of that.

Back to Vietnam, where I was recently awaiting two letters – one from overseas, the other from a domestic source. A Buu Dien Viet Nam delivery guy arrived at the building in which I live, domestic letter in hand, couldn’t figure out how to find my apartment, then made several calls to the sender.

Several calls! To the sender! He actually tried to resolve the issue!

In many countries, the guy would have disappeared like a fart in a windstorm, probably off to sip a cold one at the end of the afternoon.

The building security guard intervened, aided and abetted by the housekeeper. Note there are usually two people involved in such scenarios in Vietnam – teamwork being a principal theme, plus there is an instant witness should any extenuating circumstances arise.

I was asleep at the switch upstairs, oblivious to the entire scene unfolding between the security guard, housekeeper, and Buu Dien Viet Nam guy, but I have a damn good idea how it went:

Buu Dien Viet Nam guy: “Not so fast, this is valuable stuff.”

Buu Dien Viet Nam guy: “Lady, I know, I do this all day long. I can feel a passport in an envelope at 50 paces.”

Security guard: “Fork it over.”

Buu Dien Viet Nam guy: “Ease up, I have to hand this directly to the recipient.”

Housekeeper: “Foreigner said you could give it to us.” Buu Dien Viet Nam guy: “Tough tamales, guys, nobody told me.”

The security dude, a strong company man (and loyal workmate – I know because he keeps trying to hook me up with the housekeeper, but that’s another tale for another day) tried everything short of ripping the envelope out of the Buu Dien Viet Nam guy’s hands, but it was a no-go.

And so the standoff ended with the Buu Dien Viet Nam guy riding off into the sunset, letter in side satchel like the Pony Express, while I was upstairs, blissfully unaware of the entire drama. (I was unaware because I turn off all the buzzes, beeps, blinking lights, and rings on my phone because they bug me, so none of the senders’ calls attracted my attention, but that too is a story for another day.)

The sender, also like a dog with a bone, kept phoning the Buu Dien Viet Nam guy though by that time it’s 6:00 pm. They ultimately agreed that he’d deliver the next day, and hand the letter over to the security guard if I was absent.

Hell yes they do.

It seems they’re always on the job – I know because I frequent a café right beside a small neighbourhood branch and that post office is open evenings, weekends, you name it.

Now comes the best part: as promised, the Buu Dien Viet Nam guy phoned the sender back the next morning promising to deliver at an indicated time.

Not only did he answer his phone in the first place, he followed up the next day, called back, and provided a schedule for delivery!

When the sender relayed that status and plan to me, I was amazed because in our highly developed countries Rule #1 for service providers is to be very, very difficult to contact, especially by customers with issues.

Anyway, just to be safe, I showed up on time – actual time, not VST (that’s Vietnam Standard Time, between 20 and 30 minutes later than the real time) – only to learn that the Buu Dien Viet Nam guy already delivered the letter half an hour early.

He actually delivered both letters, which can only mean he looked through his entire pile of goodies to be delivered before setting sail that morning, realized he had two items for me, and combined them.

Pretty slick, that’ll teach me to doubt the post office in this country.

Cynics would say labour is cheap here in Vietnam, so it’s easy to throw bodies at issues instead of using sophisticated processes, but I’m not buying it. As proven in this example, all that’s needed is a phone coupled with the right attitude. No doubt those drivers are busier than ants at a picnic.

Then naysayers would argue that Buu Dien Viet Nam delivery drivers receive an incentive for each successful delivery, which is true, but it’s peanuts, certainly not worth two trips and a boatload of phone calls.

Let’s say the post office guy in a developed country earns ten times more than his counterpart in Vietnam but salaries and overheads are also 10 times more, so it’s even up, with only attitude and effort making the difference.

I’ve sent and received at least a dozen important documents domestically and internationally over the years using Buu Dien Viet Nam and the service has always met or exceeded expectations.

I had a hunch something good was cooking with them because any outfit whose delivery vehicles play “Jingle Bells” whenever they’re thrown into reverse gear, winter and summer, 12 months of the year, is clearly an organization with a bright future.

Da Lat is a perfect clone of a European medieval city, built on many hills, and featuring colonial architecture and ambience. It’s a rare and delightful discovery in the middle of a sub-continent well-known for searing hot and sweaty metropolises, thanks to an altitude of 1,500 meters.