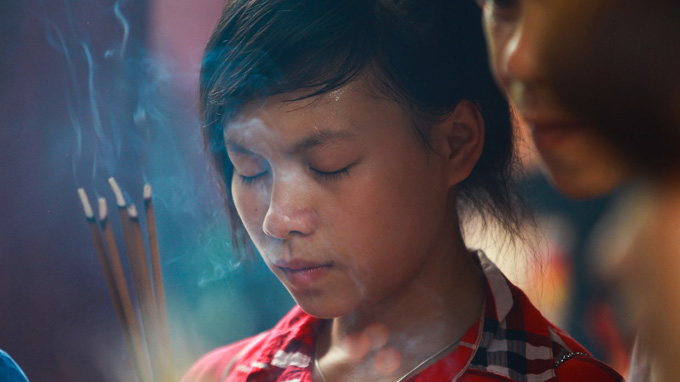 Hanoi students pray for luck prior to college exams

Hanoi high school students are resorting to spiritual elements in the hope of increasing their chances at the upcoming national college admission exams.

As in previous years, thousands of students jostled Tuesday for a place at the Temple of Literature, thought to be Vietnam's first national university, built in the 11th century, and thus a ‘sacred’ place for praying for luck in exams, to perform observances which they believe will bring them good luck during the exams.

Vietnamese 12th-graders will sit for the admission exams, administered by the Ministry of Education and Training (MoET), either on July 4 and 5 or July 9 and 10, depending on their majors.

Every year local applicants must pass the MoET tests on a set of three subjects chosen from math, physics, chemistry, literature, history, geography, biology, and foreign languages to be admitted to the college of their choice.

Official figures show that about 800,000 candidates will take their tests on the former two days.

The exams are seen as the most important of their kind to local high school students because an undergraduate degree is considered a passport to success in this fast-growing country.

See how Hanoi university hopefuls sought luck in the following photos taken yesterday at the temple by a Tuoi Tre reporter.

A father brings his daughter to the gate leading to the Temple of Literature.

Candidates gathering around the box office at the temple

Praying at the Temple of Literature

A candidate is seen smiling after buying red calligraphy paper for VND100,000 (US$4.8). The black word means ‘heart’ in English.

Students and parents planting incense in a big censer

These students are pretending to write their names on a red board, which was used to display the names of brilliant graduates in the past, in the hope that this would help them make it through the exams.

People leave small-denomination banknotes at the temple as charitable donations to receive luck in return.

Calligraphy papers, believed to bring luck to buyers, on sale for VND15,000 (71 US cents) at the temple

A male student trying to touch the head of a stone turtle statue, a practice to seek luck before exams