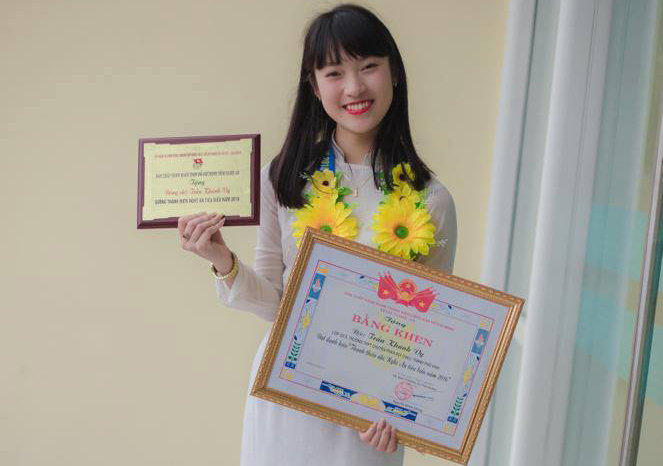 Tran Khanh Vy has gone from a YouTube sensation with videos showing that she can speak multiple languages to a new idol for young Vietnamese thanks to her multilingual talent.

The 12th grader based in the north-central province of Nghe An stole the show after she was featured in an English-speaking talk show broadcast on a national TV channel on Saturday.

The footage of the show has been shared widely on Facebook, with a wave of admiration for the small girl who talked confidently and naturally with the host entirely in English.

Vy impressed not only students of her own age, but also a lot of older people in a country where English fluency is achieved by only a few.

The 17-year-old was invited to the 8 IELTS show aired on VTV7, the education channel of national broadcaster Vietnam Television, as a girl “who speaks seven languages.”

It was the inaugural episode of the 8 IELTS show, a program meant to help locals achieve high scores in the internationally recognized test of English language proficiency.

She can also speak in the accents of both Hanoi and Ho Chi Minh City.

“As for the other four languages, I only imitate the pronunciation and the way the natives speak. I just want to bring fun to people,” she said in the show seen by Tuoi Tre News.

However, Vy’s ‘imitation’ appears to be working as all of the videos of her multilingual skill have gone viral on both YouTube and Facebook.

Being famous is no problem for the student either, she said.

“It is all fine. I just get recognized more by the people on streets. My life remains unchanged. I am still a girl who goes to school daily and has friends. Actually it is really great,” she shared.

Vy revealed part of the reason she is able to speak the different languages so fluently.

“When I was about four or five years old, I already had an early approach to foreign films and music from America, England, and English-speaking countries in general, [as well as] Korea, China, and other Asian countries. And since then I have had a huge passion for foreign languages,” she told the host.

“This just made me love language more… and that is how I started,” she said.

Besides languages, Vy said she is also into music, adding that she started playing the piano at the age of six.

She also knows how to write songs, and does “a little of rapping.”

During taping of the show and with some persuasion by the host, Vy stood up and wowed the audience with a cover of 'Can’t hold us,' a Billboard hit by Macklemore and Ryan.

After the performance, Vy continued sharing about her ‘girly hobbies,’ such as making stuff and cooking.

“You are such a colorful girl,” Phoebe Tran exclaimed in concluding the talk.

... and introduce herself in English

Their group consists of more than 40 high school students