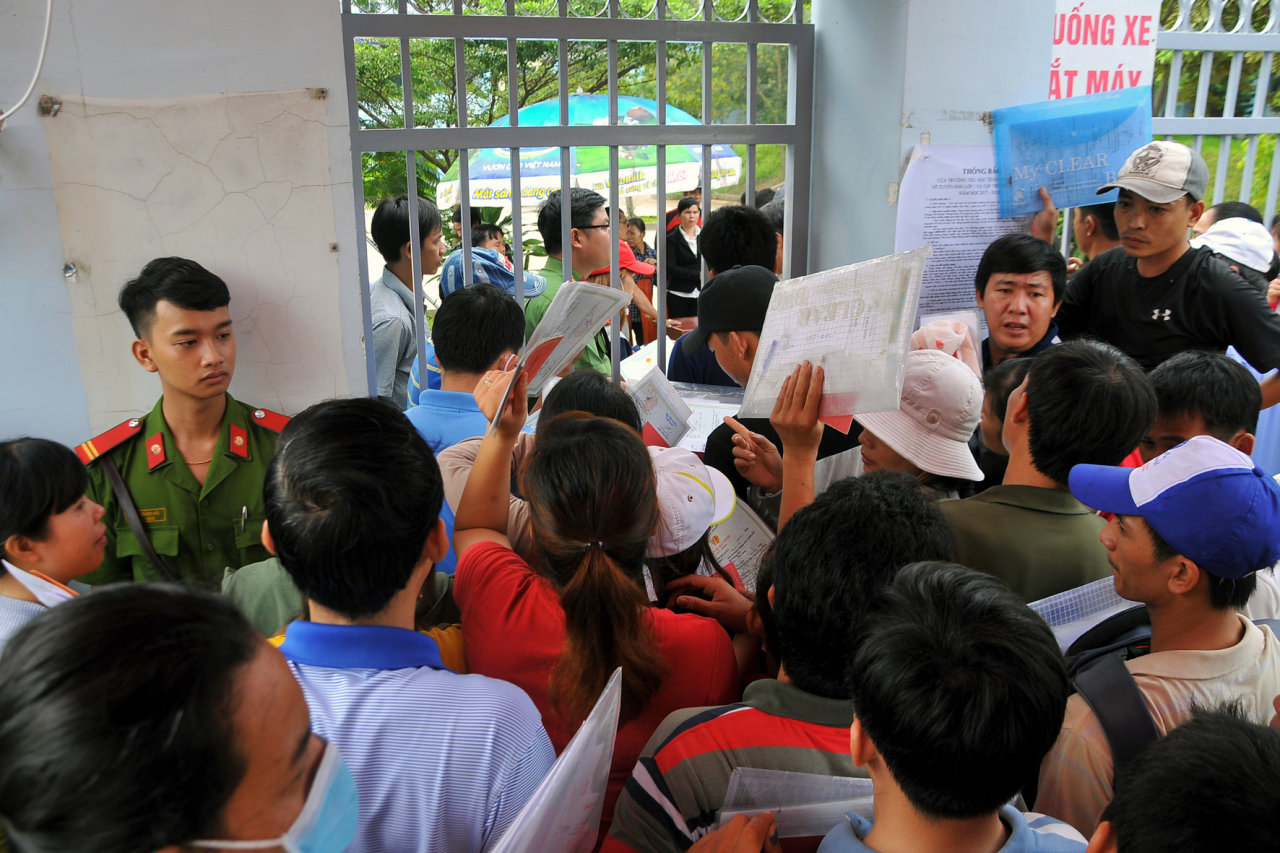 ​In Vietnam, parents go sleepless to sign children up for grade school

Dozens of parents spent a white night outside an elementary school in the southern province of Dong Nai on Monday to be the first to sign their children up for first grade the next morning.

Parents began queuing up outside Tran Quoc Toan Elementary School in An Chu Hamlet in Trang Bom District as early as 6:00 pm on Monday, despite an earlier announcement that the school would not receive applications until 7:30 am the next day.

Most grade schools in Vietnam are only allowed to accept students with permanent residency in the same locations as the institutions. In the case of Tran Quoc Toan, the school could only take in 65 students from local families in An Chu.

About 30 minutes past midnight, more than 50 parents had already gathered outside the school in two waiting lines that stretched to the back gate, with a long makeshift metal fence fixed into the ground to separate the lines.

Parents who were staying barely awake rested against the fence for power naps, or walked a few rounds to relax their muscles before rejoining the line for fear of losing their hard-earned spots.

According to Tran Van Ch., one of the parents in line, if his child could not get into the school, they would have no choice but to go for another school that was three kilometers from home.

“My husband and I have camped here since 7:00 am on Monday,” his wife said.

“We have both taken two days off to take turns securing our spot and taking care of our children at home.

“We don’t have much choice, since it’s for the good of our own kid.”

Another parent called the effort “a sacrifice worth making” for the sake of the next five years.

“I don’t mind taking one or two days off or even get penalized at work for that,” he said.

At 6:00 am on Tuesday, around 200 parents were already crowding the front gate of Tran Quoc Toan school, most of whom had not eaten anything since the previous night.

At 7:30 am, the school started allowing the parents to enter, pair by pair, to submit their application.

Despite the presence of police officers, hundreds of parents elbowed each other to reach the front of the line.

Less than one hour later, the school announced that it would not receive any more application to the disappointment of dozens of parents still waiting outside for their turn.

According to Bui Huy Toan, head of the Division of Education and Training of Trang Bom District, Tran Quoc Toan Elementary School were opened three years ago and has since been popular among local residents due to its location.

However, the school could not admit any more than 30 students per class due to requirements on national-standard schools, Toan said.

Meanwhile, out of the 130 slots for first-graders every year, Tran Quoc Toan Elementary School had to put aside 65 slots for children of workers from a local factory that had funded its construction, leaving only 65 slots for local residents.