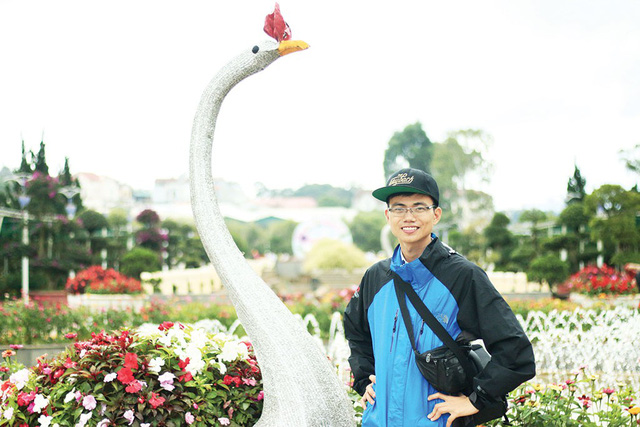 ​Vietnamese college dropout steps away from well-trodden path to succeed

A young Vietnamese man has broken loose from the conventional mould of succeess by leaving college to gain achievements in professional language teaching and schorlarship winning.

Dao Xuan Loc, born in Quang Tri Province, north-central Vietnam, had spent a hard time preparing for the entrance examination to university which his parents, who catch fish as a livelihood, considered as a milestone in his life.

He entered the Ho Chi Minh City University of Technology, one of Vietnam’s prestigious higher-education institutions, with flying colors, gaining a virtually full score in the exam.

His parents exuded hope at the news, but the bliss was short-lived as he refused to study at the school, a decision they deemed ludicriously immature for a man at a tender age.

“I felt that I’m not suited to academic life. Why are there so many jobless graduates nowadays? I wasn’t patient enough to learn at university for up to five years. I like cooking and selling. My opinion is that you shouldn’t force yourself to run after what you don’t like. Thinking along these lines, I quit,” Loc said.

The young man, now 22, arrived in Ho Chi Minh City, had his exam results stored in the school database to reassure his parents, and embarked on the sale of mam ruoc – or shrimp paste, made from fermented tiny shrimp mixed with salt.

He vended the condiment door to door, persuading people to purchase it, which was a challenge, for his central Vietnamese accent tended to handicap understanding.

“After I introduced the product and convinced them to buy, they still didn’t get what I said. It’s sometimes dispiriting. But I tried and tried and got lots of experience in convincing customers,” he recalled.

For three years, he persisted in the sale, which involved juggling various other jobs like delivering and selling shrimp paste, answering phone calls and emails from customers and presenting the product at commercial fairs.

These acitivites transformed him vastly.

Admiration for Gordon James Ramsay, a world-renowned British chef, nurtured his ambitition to become a professional cook since he left college, and motivated him to learn English.

“I really loved his videos. They changed me from an anti-English person to an English-interested one. This foreign language would give me a window on the world.”

He also earned an international certificate on language teaching conferred by Cambridge University.

He has opted to be an English teacher, in lieu of a cook, in order to bring inspiration to young Vietnamese people in learning the foreign language.

Loc has won a fully funded short-term schorlarship in marketing from Griffith University, Australia, an event which corrected misconception.

“In the past I thought scholarship was for students in big cities only. But this isn’t the case. It’s a chance for all, provided you are well prepared, able to persuade the person who considers your application,” he said.

He plans to travel to Australia in March to study, hoping to acquire knowledge from the course and apply it to the company trading in shrimp paste of his sister.

“We live in a flat world efficiently assissted by technology. Even in Vietnam, we can recognize numerous opportunities for employment and self-development.”

Dropping out of college “is an absolutely right decision in my life,” he said.